The  Krems Caricature Museum opened its doors for the first time 20 years ago. To this day it is not only Austria’s first but also the only museum for satirical art. Since its inception in 2001, the house has shown 92 different exhibitions. It is under the direction of Gottfried Gusenbauer almost half the time.

On the occasion of its anniversary year, the Caricature Museum is currently showing an extraordinary anniversary show. Next
Caricatures by Manfred Deix, Ironimus, Erich Sokol and Bruno Haberzettl also show comics and illustrations from the beginnings of the art genre to highly topical works. In an interview with noe.ORF.at, director Gottfried Gusenbauer said he was relieved that museums are now allowed to reopen and sees a great need for entertainment and satirical art, especially in times of crisis.

noe.ORF.at: Two weeks before the anniversary, the lockdown was relaxed, so museum visits are possible again. How happy are you about that?

Gottfried Gusenbauer: I’m very happy that we had the opportunity to unlock again.

The  visitors also take up the offer very well – of course with a mask and with safety measures, but we just notice that people want to get out again and want to see something.

noe.ORF.at: However, due to the restrictions, there is only a lower number of visitors to the museum. Does it pay off?

Gusenbauer: Yes, of course it pays off! We are in a situation in which one has to say that on the one hand we want to present our artists and on the other hand we also want to offer something to the audience. I notice that we are currently something of a local supplier of art and culture.

noe.ORF.at: You grew up in the Mühlviertel but went to the HTL in Waidhofen an der Ybbs?

Gusenbauer: That was quite normal for us. Every Saturday a bus went to Waidhofen an der Ybbs and for some of us it was logical that we would go to the HTL after the fourth secondary school.

The re we were in the Kolpingheim and for us there was no question
to go to the HTL in Linz, but Waidhofen was actually the clear path.

The  HTL specializes in electrical engineering, after which you studied business informatics. How do you get to comics and caricatures?

Gusenbauer: I actually did a bit of this HTL for my father. He imagined that I should be an engineer. I always had the Daniel jet drive from the Disney magazines in my head and thought that sounds interesting, I could try it out. Electrical engineering gave me my first dream job in television and film. I started out as a cable manager and production assistant, later I was a cameraman and editor.

noe.ORF.at: You initially worked for the open culture house in Linz, published a comic magazine and since 2012 you have been director of the caricature museum. Is that something like the fulfillment of a lifelong dream?

Gusenbauer: It’s definitely a dream job, I’m very happy about it. I ran a media workshop in Linz, started a comics and caricature project on the side, and founded a festival in Linz as part of the Capital of Culture. When the call came to Krems, it was of course a great honor and a great task.

noe.ORF.at: How important is the caricature museum in Krems for you?

Gusenbauer: It is very important, also across Europe.

The re aren’t that many cartoon museums. We are really in a fortunate position.

The re is the Wilhelm Busch Museum in Hanover or the Comics Museum in Angouleme in France. What we have in common is that the most important museums are not in the capital, but in smaller cities, such as Lucca in Italy. We work very closely with these friendly houses.

noe.ORF.at: Who is your favorite cartoonist?

Gusenbauer: Oh dear, I’m always afraid of this question! I love caricatures that are minimally drawn – such as those by Rudi Klein or Michael Pammesberger. Among the Austrian specialty of colored caricatures, of course, Erich Sokol, Manfred Deix and Gerhard Haderer should be mentioned, but I cannot give you an answer.

The  caricature museum has existed for 20 years. What do you wish the museum for its anniversary?

Gusenbauer: I just wish the museum happy visitors. That’s what it is. We are carried by the visits and that’s something that makes us happy. I want people to keep laughing in the museum and to keep the atmosphere in good shape. But there is a bigger goal in the long term. Mickey Mouse was born in 1928 and we want to celebrate her 100th birthday here in the museum.

Only relatives should be allowed to meet at Christmas 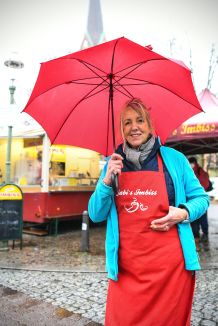 How Berliners look for – and find – their happiness in...