22.02.2021  | (rsn) – Filippo Ganna (Ineos Grenadiers) lived up to expectations and won the fight against the clock at the UAE Tour as time trial world champion wearing a rainbow jersey. With an average speed of 55.9 km / h, he completed the 13-kilometer, flat individual time trial on Al Hudayriat Island in 13:56 minutes. He displaced the Swiss Stefan Bissegger (EF Education – Nippo), who had been on the hot seat of the best of the times for a long time, by 14 seconds to second place. Third place went to Dane Mikkel Bjerg (UAE Team Emirates), 21 seconds behind.

In the overall standings, Tadej Pogacar (UAE Team Emirates) took the lead and the red jersey from the first winner Mathieu van der Poel, who did not compete in the time trial, whose Alpecin – Fenix ​​team left the UAE Tour in the morning due to a positive corona test with a team member would have.

Obama, Bush and Clinton want to get vaccinated on TV 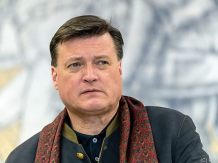 According to Thielemann, tours are permanently falling thanks to Corona –...

Are Melissa and Leander still a couple?