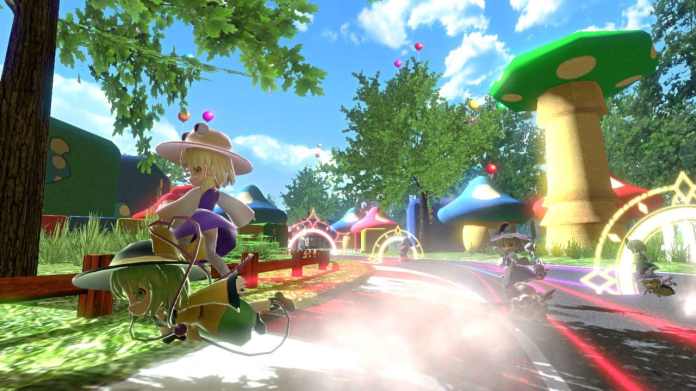 GENSOU Skydrift, the magical tag team racer from the development studio illuCalab, which is managed by a former Mario Kart developer, and the publisher Phoenixx, crosses the finish line for PlayStation 4 and PlayStation 5 on Thursday, March 9, via backward compatibility and with the debut of brand new content.

Whiz through 20 stages with a mighty duo of 22 characters, one acting as a vehicle and the other riding on their back as a driver, each with exclusive stats and spells. Change strategically between driver and vehicle position in order to master the curves of the routes perfectly or to use skills at exactly the right moment.

Two new characters and two new tracks make their GENSOU Skydrift debut in the new PlayStation version as well as in the now available Nintendo Switch and Steam versions.  The  beloved Touhou characters Alice Margatroid and Rin Kaenbyou will be playable in all versions on March 9th. Race through glowing cherry blossoms on the sky course and through a futuristic city in development area B.

Immerse yourself in the magical story in story mode, fight for the best lap in Time Attack or face the competition in Versus mode, which offers top-class action against up to seven opponents in online multiplayer. Race through the fantasy kingdom of Gensokyo with its adorable creatures, flora and colorful 3D skies in this fan-created entry to the Guinness World Record-breaking Touhou Project franchise that brings the joys of racing to the PlayStation 4.

“Racing games can be intimidating, but a game that is fan-made and has a cute and colorful cast can help change that perception,” said EIKI, lead developer, illuCalab. “GENSOU Skydrift fuses the best of a beloved genre with the magic and story of the Touhou Project to create a game that hides depth and strategy under a facade of simplicity.”

Gensou SkyDrift will be available on PlayStation 4 and PlayStation 5 via backward compatibility for € 21.99. It will support English, Japanese, and Chinese (simplified and traditional).

The  game is now available on Steam for Windows PC and Nintendo Switch.

Austria after a 5-3 home win over Hartberg in the Cup...

How much “Zero Covid” is in Merkel’s strategy?