Controls at the German-Austrian border
© © 2021 AFP

In view of the high levels of infection in the border area on the Saar and Moselle, Germany and France want to advise “promptly” on “cooperative solutions”.

In view of the high levels of infection in the border area on the Saar and Moselle, Germany and France want to advise “promptly” on “cooperative solutions”. Government spokesman Steffen Seibert announced on Monday in Berlin that the federal states of Saarland and Rhineland-Palatinate affected on the German side should also be included. Border controls like those with Austria and the Czech Republic are obviously not planned for the time being.

The  background to this are reports that the French Moselle department could be classified as a high-risk area or as a virus variant area. In the past few days, numerous infections with the South African variant of the corona virus had also occurred on the German side in the border area.

Nevertheless, the Saarland state government announced that Prime Minister Tobias Hans (CDU) and the Rhineland-Palatinate Prime Minister Malu Dreyer (SPD) had “successfully campaigned” in talks with the federal government that there would be no border controls for the time being. Instead, a high-ranking task force made up of representatives from Germany and France should be set up.

“We are concerned about the increased occurrence of virus variants among our neighbors,” said Hans. If there are no common control strategies, “border controls can also be considered as a last resort”.

The  answer is initially to rely on “cooperation instead of national solo efforts”.

“Our border regions are closely interlinked and should remain so in times of joint pandemic control,” emphasized Dreyer. “We know that both federal states live very closely with friends on the other side,” Seibert had previously said.

In Germany, the Federal Ministry of the Interior would formally be responsible for closing borders or tightening controls. A ministry spokesman referred to the upcoming talks in the course of the week in Berlin. Before that he could “not announce any further details”.

Border controls and massive travel restrictions have so far existed at the German borders with the Czech Republic and the Austrian state of Tyrol.

The  South African variant of the corona virus is also widespread in Tyrol.

Now Favre is talking: “We would have had a successful season...

19 – House of History secures ampoule from the first batch...

“Just the beginning of our fight”: Trump promises “orderly handover”

Nocturnal search without success: two-year-old from Fulda disappears without a trace

News from the 4 hill tournament – Ammann fails in qualification... 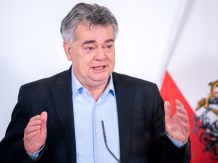