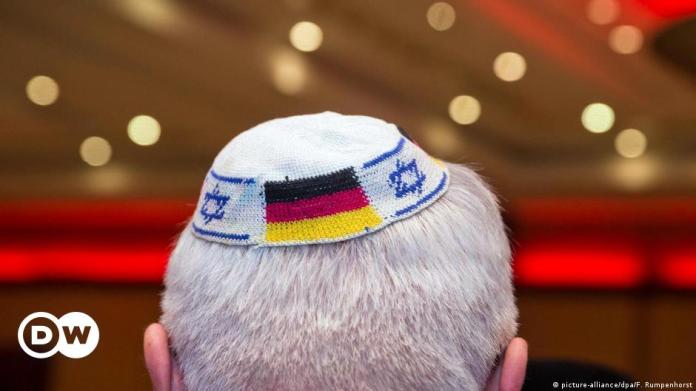 The  increasing numbers of congregations are also remarkable because in 1945 it seemed unthinkable for the vast majority of Jews to rebuild the lost congregations in the country from which the genocide of six million European Jews began.

With the end of World War II, the Allies liberated around 15,000 German Jews. Most of them had gone into hiding, others survived the concentration camps. Many who chose to stay in Germany had non-Jewish spouses or parents.

The  German-Jewish journalist Karl Marx – not to be confused with the famous philosopher and economist – was one of the first German Jews to return to the country. Marx spent the war in exile. But his decision to return weighed on him. He later remembered crossing the border into the British Occupied Zone in 1946 and asking himself: “How can I, after everything that has happened, live as a Jew in Germany?” 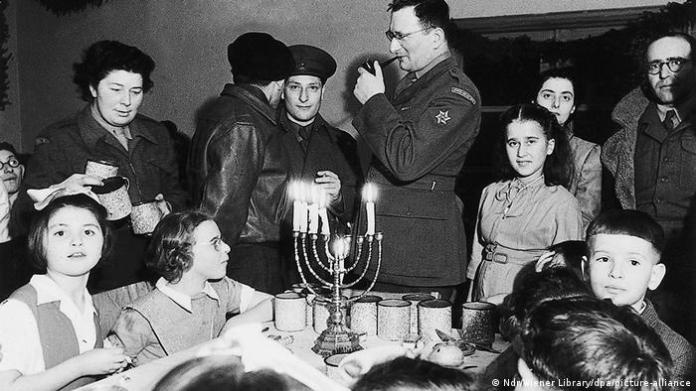 “Never again settle on the blood-stained soil of Germany”

The  decision of Marx and a few thousand other idealists has been questioned by many, both inside and outside the Jewish community.

The  World Jewish Congress met for the first time since World War II in July 1948 and issued a clear resolution in which it spoke of the “determination of the Jewish people never to settle on the blood-stained soil of Germany”.

The  reasons why some settled in Germany, despite the rejection of the international Jewish community, were many, says Anthony Kauders, historian at the British Keele University: “Some had survived with the help of other Germans, and they refused to consider all Germans to be regarded equally guilty. Others were too old or too frail to emigrate. “

Reconstruction of German Jewry against all odds

The y consisted of two very different groups: On the one hand there were the German Jews, most of whom were highly assimilated before the war and integrated into their German environment.

The  other group: Thousands of displaced Jewish refugees from Eastern European countries who involuntarily found themselves in Germany.

The y had great difficulty making a living because they barely spoke the German language. 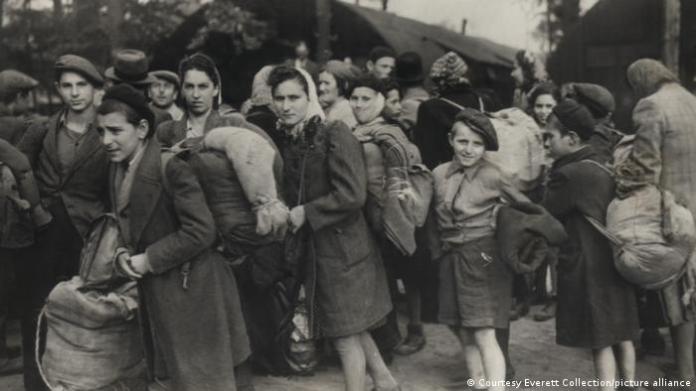 Over 90 percent of the Jewish refugees who came to Germany left the country within the next three to four years, most of them went to the USA or to the newly founded Israel. Only about 15,000 remained in Germany.

Many of the Eastern European Jews who stayed were eventually given German citizenship.

The y were new to the country and relied on their community for their religious, cultural, and social needs. “

The y led a very withdrawn life,” says Kauders. “In the 1950s and 60s, being a Jewish member of a community you only knew other Jews, you didn’t really get together with others.”

Foundation of the Central Council of Jews

In July 1950, the various communities united and founded an umbrella organization to represent them: the Central Council of Jews in Germany.

The  persistence of the German-Jewish community led to pragmatic cooperation with international Jewish institutions and ultimately to the German Central Council becoming a full member of the World Jewish Congress. 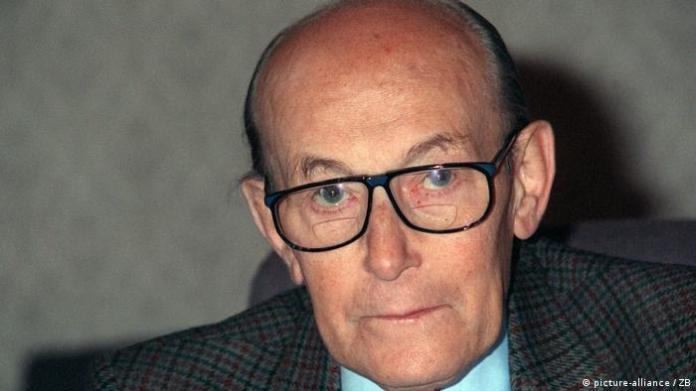 Meanwhile, anti-Semitism remained a problem in Germany. A 1946 report circulated by the US Army found that 18 percent of Germans were still “radical anti-Semites,” 21 percent anti-Semites, and another 22 percent “moderate racists.” A survey from 1947 found that more than a third of Germans would support it if there were no Jews in Germany.

This atmosphere changed when the West German government took a clear position against anti-Semitism, says historian Kauders: “For a change, the government officially fought against it, and of course that makes all the difference. That’s something [die Juden] in Germany or the Eastern European countries from which they came, had not previously experienced. That gave Jews in Germany a feeling of security. “

Two German states emerged from the ruins of the Third Reich:

The  German Democratic Republic (GDR), part of the Soviet Eastern Bloc, and the West-oriented Federal Republic of Germany (FRG).

Many of the politically idealistic Jews of German descent initially moved to the east of the country, where the better-known Jews lived in the years after the war, such as the famous writer, Jewish and communist Anna Seghers. “Nobody came to East Germany to live there as a Jew – they wanted to live there as communists,” says sociologist and author Irene Runge, who moved to Germany with her parents from the United States as a young girl in 1949: “

The y suppressed everything Jewish in itself.”

Runge says that was the case with many Jews in the former GDR: “I think it was the only way to live there. You had to focus on the political goal.

The  attitude was: ‘We won’t let the Germans stay alone in this country, we will make it a better state than ever before. ‘”

On paper there was next to no Jewish life in the GDR. In the 1950s there were only 1,500 registered parishioners.

Israel as a guarantee of survival

For the FRG, the establishment of official diplomatic relations with Israel in 1965 marked an important step forward.

The  German-Jewish communities made it their task to promote the exchange of people in both countries. “For German Jews, more than for other Jews, Israel became very important because of the Holocaust.

The re was always the idea of ​​’life in packed suitcases’, which means that if things get too bad, we go away,” explains Kauders.

Meanwhile a second and third generation had grown up. Some left Germany for Israel and other countries, but many stayed. “In the 1980s, a younger generation emerged that had had enough of the mentality of the elderly to see Germany only as a temporary solution,” says Kauders: “This younger generation is much louder and interested, open and not behind closed doors to fight for Jewish rights. “

This post-Holocaust generation was joined by new immigrants from Poland, Czechoslovakia, Israel and Iran. Synagogues were built and new schools opened. Religious pluralism developed, communities were formed and expanded. Nevertheless, the number of registered members of the Jewish synagogues and religious communities never exceeded 30,000 for the time being.

The  most significant change occurred with the dissolution of the Soviet Union at the end of 1991. After the opening of the borders between East and West, almost 220,000 Jews from the former Soviet Union immigrated to the reunified Germany as so-called quota refugees. New churches formed almost overnight, and old ones multiplied. Community centers, schools and synagogues sprang up everywhere.

The  influx of “Russian Jews” revitalized stagnant communities and saved them from demographic collapse. But integrating them was also a major challenge, as most of the newcomers were much more secular than the local traditional communities. “

The ir arrival changed everything,” recalls the sociologist Runge. “ 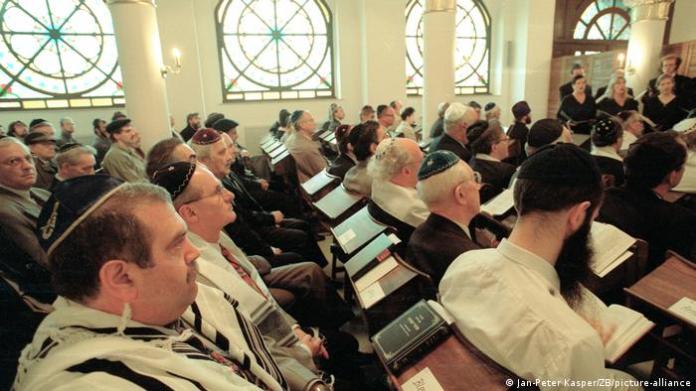 With the immigration of Soviet Jews, there was a revival of the communities like here in Leipzig

Today, Jews from the Soviet Union and their descendants make up the overwhelming majority of German Jews – according to some estimates, up to 90 percent of the community members. “

The  irony is that they were never interested in the debates that preoccupied the local community, for whom Jewish life in Germany had always been complex and problematic.

The y were more pragmatic and certainly less guilt-driven than those that followed the Shoah had rebuilt Jewish life, “says historian Kauders.

Today, similar motives seem to move Israelis and Jews from western countries such as the USA, Canada, Argentina and Great Britain to settle in Germany – and especially in Berlin.

An estimated 15,000 to 20,000 young, highly educated, secular, politically left-wing Israelis have come to Germany in the past two decades. Many of them are related to Holocaust survivors. Some have citizenship of an EU country through their parents and grandparents, which makes it easier for them to arrive in Germany.

But the shadow of anti-Semitism has not yet disappeared. Shortly before the events scheduled this week to mark the 1700th anniversary of Jewish life in Germany, a new police report has revealed a surge in anti-Semitic hate crime, with over 2275 incidents in 2020.

The  fact that there are Jews who are moving to Germany today, whose own grandparents survived the Holocaust and fled, is nevertheless a complete historical change, says historian Anthony Kauders.

The  fact that it is cool for Israelis to be in Berlin today without feeling guilty shows how pluralistic Israeli and German society has become. In this sense, the post-war period is over.”

Racism allegation in the Champions League: “Tonight athletes made a historic...

Corona shutdown and local transport: A stop for buses and trains...

Cathy Lugner: “Damn hot and sexy” – she shows herself so...

At the age of 50: Model Stella Tennant died unexpectedly

What is the incidence value in my region? As of...