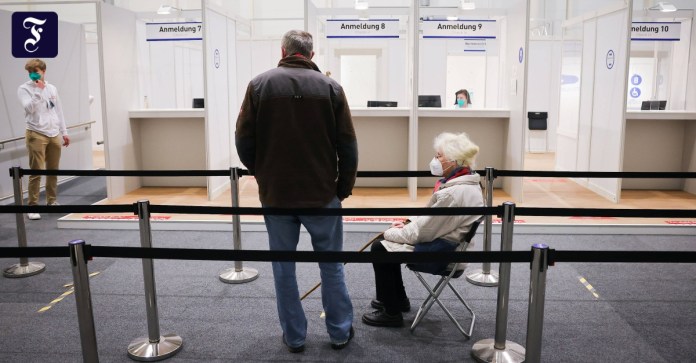 Political correspondent for Lower Saxony, Saxony-Anhalt and Bremen based in Hanover.

A screen shows the current figures: 1795 people are vaccinated this evening.

The  center has been planned for up to 7000 vaccinations. But it is also foreseeable that snakes in vaccination centers will soon become a problem.

The  vaccine is still in short supply, but so much soon comes that it will be difficult to vaccinate it quickly. Larger vaccination centers will not be enough. Politicians will have to drastically reduce the effort involved in appointments and priority groups.

At the Hamburg vaccination center, you need 45 minutes from moin to goodbye, from registration to checking your eligibility for vaccination, advice, from the relaxation room, checking the documents at the end – and spades in between.

The  capacities can be increased, even with longer opening times there could be more than 8000 vaccinations a day.

The  Hamburg Senator for Health Melanie Leonhard (SPD) says, however, that she expects that it will be necessary by mid-March or by the end of March at the latest, “that we use other options besides the vaccination center”. If the vaccines are delivered as advertised. It is easy to calculate what the vaccination center and mobile teams can do every day. If that’s not enough, you have to think about something. She has long been doing that with her authority. But it quickly becomes complicated.

Spahn wants to involve family doctors “as quickly as possible”. But how?

The  chairman of the board of the National Association of Statutory Health Insurance Physicians, Andreas Gassen, believes that the large vaccine shortage will be over in six to eight weeks. For the second quarter of the year, Biontech and Pfizer have committed 40.2 million doses.

The re are also large deliveries from Astra-Zeneca and Moderna. And possibly from Johnson & Johnson and Curevac, which could be approved by then.

Gassen’s association has calculated that the capacity of the vaccination centers may no longer be sufficient by March. This leads to the question of how the cans can be inoculated in another way. Gassen is astonished that politicians have not yet given a clear answer to this obvious question. When asked, Federal Minister of Health Jens Spahn said only very vaguely that the resident doctors should be involved “as quickly as possible” in the vaccination campaign. But how exactly?

The  previous plan from Spahn is in the current vaccination ordinance of February 8th.

The re, the recommendations of the Standing Vaccination Commission were cast in legal form with a few modifications:

The  commission divides the population into six priority levels. In the vaccination ordinance, more than eighty million inhabitants are divided into four pots based on criteria such as age, previous illnesses and occupation. Currently, citizens are still being vaccinated from priority level 1, which is where those over eighty are.

Coalition submitted a request for a partial ban on glyphosate

Resignations after the mask affair: Union MPs bow to the pressure

Press conference for the Corona demo in Vienna

Meghan Markle and Prince Harry in an interview with Oprah Winfrey

Israel triumphs – Germany fails: This is behind the vaccination success

You can still order the PlayStation 5 console here

25 years later: This is what the green Windows XP meadow... Allianz Germany gets away with injuries in the Corona year