In addition to the lack of CoV tests, those rejected either had no digital travel registration or were not among the exceptions for entering Germany – such as doctors and nursing staff.

The  German government had declared the Czech Republic, Slovakia and large parts of Tyrol in Austria to be so-called virus variant areas. Since last Sunday, only Germans and foreigners with a residence and residence permit in Germany have been allowed to enter from there.

The re are exceptions for truck drivers and cross-border commuters with systemically relevant professions. You must have a negative test that is no older than 48 hours. 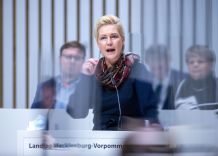 GTNM in the live ticker: Klum’s candidates take it to the...

Why “Kevin alone in New York” almost failed because of Donald...

Appeal failed – Navalnyj has to go to a prison camp

OceanaGold comments on progress in renewing the FTAA for the Didipio...

Edin Terzic introduces himself as the new trainer at a press...