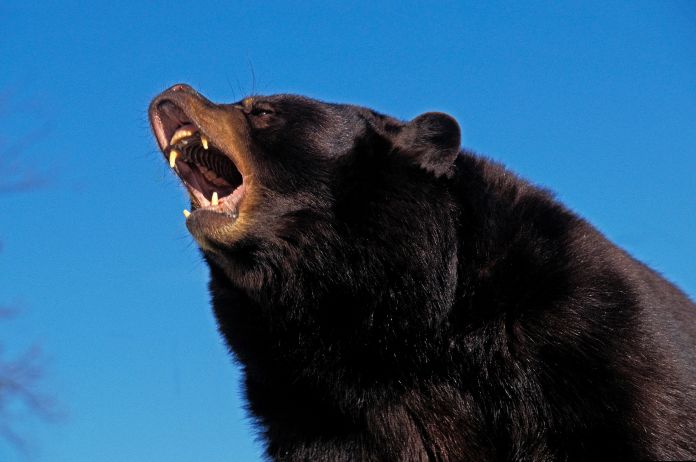 Shannon Stevens had the shock of her life in a toilet in Alaska. No sooner had she sat down than the supposedly quiet place bit shut.

“I went out and sat on the toilet – and was immediately bitten by something in my buttocks,” the American describes her scary experience to the Associated Press. “I immediately jumped up and screamed like a stick!”

Shannon Stevens drove with her brother Erik and his girlfriend into the wilderness of Alaska on their snowmobiles on February 13th to spend their camping holiday together in a yurt about 30 kilometers outside the small town of Haines.

As soon as he heard his sister’s scream, Erik hurried to the Spartan outhouse, which is about 50 meters from the accommodation.

The re he found Shannon trying to dress her back wound. Fortunately, in the light of his helmet lamp, the injury didn’t look so bad. It could also have come from a squirrel.

“He looked straight into my eyes”

But when the man entered the quiet place, he too experienced a shock. “I opened the toilet lid and there was a bear’s face!” He recalls.

The  head of the wild animal is said to have been “exactly at the height of the toilet seat”.

“He just looked up through the hole, right into my eyes.”

Completely perplexed, he immediately slammed the toilet seat shut again, grabbed his sister by the hand and fled with her back to the yurt.

The re he could now treat Shannon’s wound with a first aid kit. “It was bleeding, but it wasn’t too bad,” said the bear victim.

The  next morning, the vacationers carefully ventured outside. In the snow they discovered the traces of the biting house stool that led directly out of the back door of the toilet into the forest. Apparently the animal had thought the outhouse was a cozy den and had sought shelter from the cold there.

The  biologist Carl Koch from the Alaska Wildlife Agency was surprised by the unusual attack: Based on the pictures of Shannon’s injury, he suspects that the black bear did not bite but “only” gave her paw, which was reinforced with its claws, a firm clap on the bottom.

The  place of the unabashed assault is likely to be unique: “However, for that matter, she could be the only person on the whole planet to whom this has happened so far.”

In any case, Shannon made a new resolution after this experience: “In the future I will definitely take a look before I go to the toilet.”

Great Britain: Patient with Brazil mutation is found by contact tracers after days of searching

Warning, WhatsApp will soon be deleted on these phones

CDU: Extreme frustration in the Merz camp can be dangerous for...

Change in the public prosecutor’s office: economic investigators are looking for...

After the Hitzlsperger attack – VfB president fires back