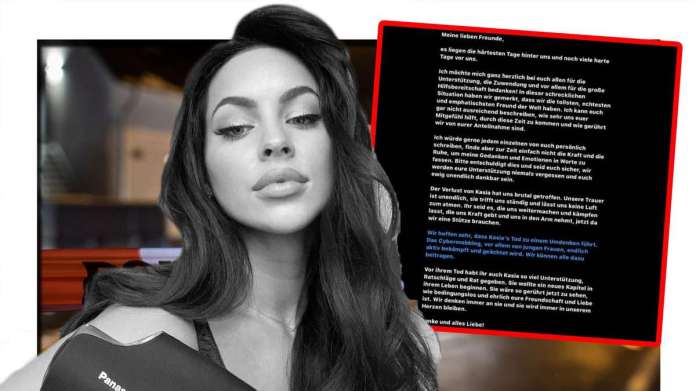 On February 9th, the former GNTM candidate Kasia Lenhardt died in Berlin. More than a week later, her mother Adrianna turned to her fans with an emotional post on Instagram.

Berlin – It is news that is still shaking all of Germany: Kasia Lenhardt († 25) was found lifeless in her apartment in Charlottenburg on February 9, 2021. And even today, more than a week later, there is no end to the condolences online. Now the mother of the former GNTM candidate comments on the incidents on Instagram and thanks her daughter for the support of the fans.

GNTM candidate Kasia Lenhardt’s mother thanks her for condolences

„ The  toughest days are behind us and there are still many tough days ahead of us“, Writes Adrianna Lenhardt on Instagram.

The  mother of the late GNTM candidate is infinitely grateful for the support, attention and helpfulness of her daughter’s fans. “I cannot describe to you sufficiently how much your compassion helps us to get through this time and how touched we are by your sympathy,” she asserts. Kasia’s mother would love to write to each and every one of them and say thank you – but she currently lacks not only the time, but also the strength.

The  loss of Kasia hit us brutally. Our grief is infinite, it hits us all the time and leaves us no air to breathe ”, continues Adrianna Lenhardt. Kasia’s mother now seems to be processing her grief on Instagram. Every day she posts pictures and memories of her daughter there.

The re is no end to the condolences.

The  sudden death of the former GNTM candidate still takes fans away. “She would be so touched to see how unconditional and honest your friendship and love is,” says Adrianna Lenhardt.

Subscribe to our Telegram channel now and be the first to read our best stories.

Kasia Lenhardt’s death not only triggered a wave of sadness on social networks. Many well-known influencers and stars, such as Kim Gloss and Sara Kulka, have been campaigning against cyberbullying since the sad news. Because Kasia Lenhardt died just a week after separating from ex-boyfriend Jérôme Boateng (32).

The  public love-out had resulted in a violent mud fight. “We very much hope that Kasia’s death will lead to a rethink. Cyberbullying, especially by young women, is finally being fought and ostracized. We can all contribute ”, Kasia’s mother wrote.

Ted Cruz: Texas in snow chaos and Senator is on vacation...

Frankfurt: nurse has to wait for vaccination

Peak smoothing: throttling instead of forced charging breaks for e-cars

Air raid protection in Stuttgart 1942: first the bunkers, then the...

Which discounters are now increasing their prices?

This is how the Queen celebrates Christmas in the Corona crisis