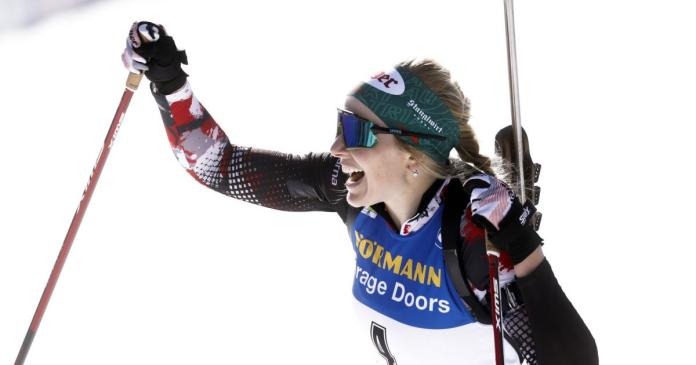 The  27-year-old was the only one in the entire field to remain without a penalty loop on Sunday and triumphed over the Norwegians Ingrid Landmark Tandrevold and Tiril Eckhoff.

She became the first ever Austrian Biathlon World Cup gold winner, with Wolfgang Rottmann in 2000 in the individual race for men and Dominik Landertinger in 2009 in the mass start as well, only two.

“It’s unbelievable, so beautiful. Four zero was the basic requirement today, and that I could still enjoy it on the final lap … all the staff stood by the track and just celebrated me on my face, it’s unbelievable what’s going on, “said Lisa Hauser, who was visibly moved.

“Everything is still so unreal”

“Now I’m slowly starting to realize what happened there, but it’s still so unreal. Now it’s all so early, I can’t really believe what happened there. Now I’m world champion “It’s just so unbelievably beautiful and I’m having such fun. I’ll enjoy it now.”

In Slovenia, the Tyrolean had already won silver in the mixed relay and in the pursuit. Afterwards, Simon Eder also competed in the mass start.

In the absolute top of the world

The  high altitude of biathlete Lisa

The resa Hauser, which began a few weeks ago, has reached its preliminary climax with the mass start world championship title.

The  down-to-earth cheerful nature from Reith bei Kitzbühel arrived at the age of 27 where experts have long seen them because of their facilities – among the absolute best in the world. No Austrian has ever succeeded in this form in women’s biathlon, and there have only been two ÖSV world champions among men.

Since January, Hauser has presented himself as the best in the entire World Cup with rows of podium places and her maiden win in Antholz. She followed on from this at the season highlight in Pokljuka.

The  surprising silver win with the ÖSV mixed relay at the start of the World Cup was followed by silver in the pursuit and now with gold in the individual at the end of the really big coup. In between she finished fourth in the individual and even won the small crystal ball in this discipline.

Trials – Frankfurt am Main – Judgment in the trial of...

Researchers discover life under ice that is 900 meters thick

CDU party congress: “Life after ‘Mutti’ will be different”