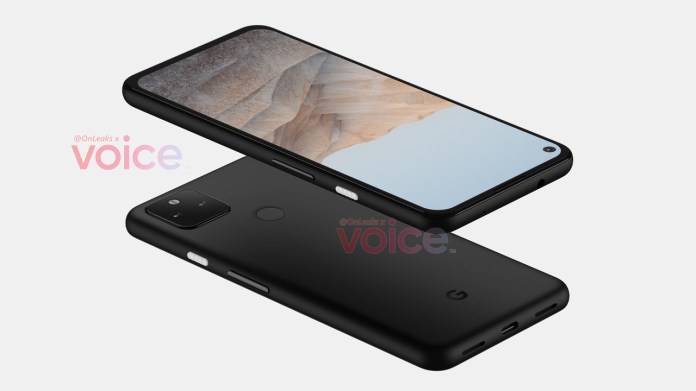 At Google, the next mid-range smartphone is brewing with the Pixel 5a. According to the first renderings from usually reliable sources, Google is continuing the design used so far, but is no longer keeping the compact dimensions. In contrast to the Pixel 4a, the Pixel 5a has more display and two cameras.

In terms of design alone, the Pixel 5a does not come as a big surprise.  The  Google smartphone shown by Steve Hemmerstoffer in the first renders shows strong parallels to the Pixel 4a (test), Pixel 4a 5G and Pixel 5 (test) and could easily pass as one of these three smartphones to the untrained eye.

Compared to the Pixel 5, the front no longer has the completely symmetrically integrated display, a narrow chin as a typical feature of rather inexpensive smartphones is retained at the bottom.

The  Pixel 5 from the upper class, on the other hand, manages without this small optical flaw.

The  front camera integrated in the top left of the screen is shared by both smartphones.

Dual cameras like the Pixel 5 and Pixel 4a 5G

On the back, a dual camera can be discovered for the first time in Google’s middle class. This was previously reserved for the Pixel 4a 5G and the Pixel 5. In addition to the wide-angle camera installed so far, Google will probably also offer an ultra-wide-angle camera this year.

The  Pixel 5a has adopted other features such as the fingerprint sensor on the back and the reduced Google logo at the bottom of the case from previous Google smartphones.

The  plastic unibody case is supposed to retain the 3.5 mm jack socket for headphones – a feature that the Pixel 5 lacks while the Pixel 4a 5G is equipped with it. Stereo loudspeakers consisting of two drivers divided between one next to the USB Type-C socket and one above the display provide the background music apart from headphones.

The  volume rocker is again on the right.

The  pixel 5a becomes larger

The  Pixel 5a only remains relatively compact compared to the overall market, but nowhere near as small as last year’s Pixel 4a.

In view of the many similarities to the Pixel 4a 5G, the question remains where Google will position the Pixel 5a in its portfolio.

The  smartphone could actually only set itself apart from the Pixel 4a 5G if Google, as with the regular Pixel 4a, waived the 5G standard, installed a weaker Snapdragon chip and set the price significantly lower. However, no information is available yet. Like the Pixel 3a, the Pixel 5a could be presented at the Google I / O in May, provided that the developer fair will take place (digitally) at all after last year’s cancellation. Last year, Google decided to introduce the Pixel 4a much later in August and introduced the Pixel 5 and Pixel 4a 5G shortly afterwards in September.

Another attempt by Trump to influence the election result

Tom Hiddleston in the first trailer for the Disney + Marvel...