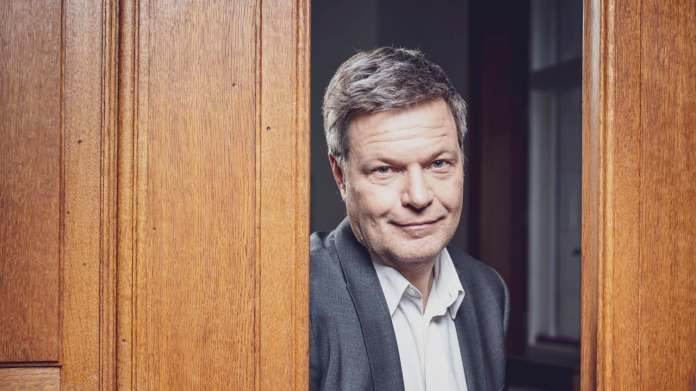 The  Greens want to run a candidate for Chancellor for the first time this year. And they try everything just not to scare off voters with steep statements.

But now the Green parliamentary group leader Anton Hofreiter (51) has branded the single-family home as an environmental problem and triggered a storm of indignation. Party leader Robert Habeck tries in the BILD-am-SONNTAG interview to appease single-family home owners.

BILD am SONNTAG: Mr. Habeck, how do you live?

Robert Habeck: “In an old, renovated and well-insulated house that was previously empty for a long time. We were actually looking for an apartment. But we haven’t found any that we would have fit into with our four sons. So it became a house after all. ”

The  Green parliamentary group leader Anton Hofreiter said: Single-family houses need a lot of concrete, a lot of space and a lot of energy. So do you live in an ecological sin?

Habeck: “Our house had been there for a hundred years. And single-family houses can also be built sustainably.

The  single-family home will always have a place in Germany. For many people it is a place of longing, a promise of security, a wish for life. We only have a problem when building is made without sense or understanding. ”
Your colleague Hofreiter finds single-family houses in large cities with a housing shortage rather annoying. It sounds different for you now …

Habeck: “Both of us are driven by skyrocketing real estate prices in city centers. Many cities are relying on denser development to solve the problem. I think that is appropriate and correct. Families with low or middle incomes must also be able to live there comfortably. That means: making living cheaper, building more and building for the benefit of the community. ”

Are you currently trying to downplay the debate so that the Greens are not again seen as a party to ban?

Habeck: “Like Toni Hofreiter, I try to lead a necessary debate in a differentiated manner.

The re are always rules and regulations for building, and not just for the Greens. Housing shortages, land consumption and climate protection make adjustments necessary.

The  rest is a spiral of excitement in the primary campaign. ”

The  Federal Republic of Germany has never curtailed the basic rights of its citizens as severely as in the Corona crisis.

The  CDU chairman Armin Laschet criticizes that the state treats citizens like underage children. Do you agree?

Habeck: “Armin Laschet is one of the most important representatives of the German state. If he has something to complain about, then he has to change it. ”

Laschet has also called for easing. Politicians should not always invent new incidence values ​​in order to extend the lockdown. Is he right?

The  mutations in the virus force us to be more careful. A third wave threatens. ”

But how much longer can the state expect the citizens to have such strict rules?

Habeck: “He has to do it as long as we have no other means of protecting lives and keeping the health system from collapsing. What makes you so dissatisfied:

The re are alternatives, but they have stumbled.

The  vaccine is far too scarce, the appointment schedule is hooked, too little is tested, the positive tests are not checked enough for the mutation, the Corona warning app for more than 60 million euros does not work. As a result, many people turn away in frustration. If we had more vaccine, more tests, an effective Corona app, we would have alternatives to extensive lockdown. “

Feminist politics should also be the aspiration of men. It is mine

Would you get vaccinated with AstraZeneca?

Can the state prescribe the preparation to citizens when offering vaccinations?

Habeck: “As long as there is so little vaccine, you have to be pragmatic and take the vaccine that is there.”

You have just described how you would wield power in a 374-page book.

The  whole thing is seen as an application for the Chancellery. When will the Greens announce their candidacy for chancellor?

Habeck: “I have no news there. When spring has become spring – between Easter and Pentecost. ”

Habeck: “It would be a problem if I made politics solely for white, straight men over 50. If I believed that I was preventing equality, I would have to resign as party leader tomorrow. ”

The  Greens and their co-chair Annalena Baerbock could also nominate a woman for the Chancellery. Would you make politics for women as good as Ms. Baerbock?

Habeck: “Equality and emancipation are the basis for a free and fair society. This also includes the equal presence of women in politics and business, including women’s quotas. Such feminist politics should also be the aspiration of men. It is mine. ”

In a current Kantar survey for BILD am SONNTAG, Habeck and Baerbock are almost on par in terms of popularity. 33 percent consider him the better candidate for chancellor, 29 percent are for them. 38 percent are undecided.

What can Ms. Baerbock do better than you?

Habeck: “Jump on the trampoline. As a teenager, Baerbock won bronze three times at the German championships. ”

And you better than Frau Baerbock?

Robert Habeck plays at home in Schleswig-Holstein with his four sons and has a basketball hoop in the yard.

A chancellor does not have to be able to do both. How do you even want to measure the chances of success of yourself and Ms. Baerbock? Is it up to the polls?

Habeck: “We have to provide answers to all challenges, from the ecological crisis to strengthening Europe. Annalena Baerbocks and my conviction is: Whoever has the best chance to gain people’s trust for all the great tasks that should do it. “

Huge fuss about the family home! Green parliamentary group leader Anton Hofreiter had described it as harmful to the environment in a “Spiegel” interview.

That’s what his criticism is about:

The  energy requirement of a single-family house is three times as high as that of an apartment (same living space). Reason:

The  increased heating requirement due to the larger proportion of external walls.

► Areas that were previously greened are often built on (“sealed”) for new single-family housing estates. In Germany, the area of ​​30 handball fields is concreted over every hour.

Do you really still believe that you can overtake the Union in the election?

Habeck: “Of course, it is not self-evident, but the situation has never been so open.

The  Chancellor is no longer running, the Union is worn out, she doesn’t know where to go. It is now a matter of taking the future of the country in hand. About creating something that extends beyond your own present. For the will of responsibility in an office to which everything is subordinate. ”

What are you specifically accusing the Union of?

Habeck: “A botched understanding of conservatism. It is conservative that you have to be able to make a living from your work and that the wages are sufficient. In Germany, however, clothing is sold that was made abroad under starvation wages. Farmers are forced to produce cheaper and cheaper. It is conservative that rules are observed, even by those in power, that tax dumping and tax evasion are fought hard, that people in need are helped, that livelihoods are protected.

The  Union does not do any of that. She no longer knows what she actually stands for. “

Kyrie Irving is missing from the Brooklyn Nets for personal reasons

World Cup silver – Lisa Hauser in the valley of tears...

Plaintiffs lose in the Postbank dispute with Deutsche Bank

Greenpeace protests at the Chancellery – criticism of the supply chain...