LASK has continued its winning streak against Admira in the Bundesliga.  The  Linz team won 2-1 (1-0) on Sunday and won the eighth duel with the Lower Austrians in a row. Goalscorer and bad luck raven in one person was Andreas Gruber, who had to be carried off injured three minutes after his early goal (9th). Thomas Goiginger (86.) increased to 2-0 before Luca Kronberger hit the late goal (90.).

Gruber had taken the first chance of Linz immediately.

The  striker took a cross from Andres Andrade directly and hit the inside bar (9th). Shortly afterwards, the game was over for him with a knee injury on the left.

LASK then determined the game, but Admira kept appearing dangerously in front of Tobias Lawal’s goal. Instead of team goalkeeper Alexander Schlager, who suffers from adductor problems, the 20-year-old came to his second Bundesliga appearance and did well against Marcus Maier (16th) and especially Matthias Ostrzolek (32nd).

He was able to fix his own blackout shortly before the break (43rd): Lawal played the ball in front of Andrew Wooten, who was completely alone at the penalty area, but was able to parry the Admira striker’s shot.

After the change, a competitive game developed before the LASK became more and more dominant. While Admira didn’t really have a chance to equalize, Gernot Trauner headed first (67th) and Goiginger (71th) with the greatest opportunities for a preliminary decision.

In the end, it got turbulent again. Goiginger increased to 2-0, where he “exploited” his own template. Johannes Eggestein had sprinted to the ball from an offside position, but ultimately did not intervene.

The  shortly before substitute Kronberger provided with his connection goal after Atanga cross for an exciting injury time. LASK survived this, and with its third win in a row, they consolidated third place in the table.

All goals in the VIDEO 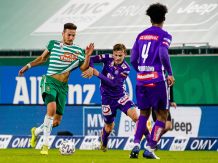 After losing to Bayern: BVB frustration over referee

LASK starts in women’s football and is looking for players

Kriechmayr and the Saalbach “Party Crashers”

Horror record against Holstein Kiel: HSV has to defeat its greatest feared opponent

Football: LASK gives the starting signal for the women’s team

Nove Mesto: Denise Herrmann is on the podium after catching up in the pursuit

The Salzburg Festival has set a program for 2021

The new corona rules – what opens when in Brandenburg? ...

Wanted extras for “Klammer”: Become part of a unique film in...

Schalke 04: next return campaign? Everything speaks for it