Does Corona send women back to the stove?

The  pandemic and lockdown reactivate for role models that were believed to be outdated. A before-and-after comparison shows a more differentiated picture.

The  Corona crisis brings it to light:

The  main burden of family work lies on the mothers, while fathers remain the breadwinners.

The  division of labor between the sexes is more traditional than ever.

This thesis is fed anew by some studies. But formulated in such a general way, it is imprecise.

The  picture of the pandemic-related overloading of mothers distorts the actual work that is done in families. Fathers are excluded, as are the different family conditions. We scientists are also involved in such distortions. Many studies are based exclusively on self-reports, and a before-and-after comparison is usually not made. Nevertheless, one pretends that it is a matter of reliable knowledge.

The  fact is: Even before Covid-19, the traditionalization of family work was an Achilles heel of equality. Up to February 2020, women did an average of two thirds of the housework and family work, men one third. In order to be able to assess the development of role models in the pandemic, a pre-crisis comparison is essential.

Men only gained a percentage more in family work

And this one is surprising. During the first lockdown – no findings are available from the second lockdown – mothers increased their family benefits by an average of 20 percent, from 6.6 to 7.9 hours per day, fathers by 70 percent from 3.3 to 5.6 hours. Looking at it differently, it was above all well-educated, working women who took over the lion’s share of family management – even if they were as committed as their partners. In relation to them, the thesis can be confirmed. But the results on men’s engagement are unexpected. It was hardly the academics who significantly increased their commitment, but rather those with vocational training. Those who were affected by short-time work or business closures did an average of 8.1 hours of family work every day, about as much as their mothers.

If the partner also works in systemically relevant professions – in school, nursing or in service companies – in such family constellations there was often a role reversal that gave men new autonomy and new experiences. Logical, one could reply: One can always make a virtue out of necessity! Although this objection is justified, it is astonishing that fathers on short-time work were most satisfied with their situation, while mothers in the same situation were significantly more dissatisfied. If, on the other hand, both partners were at home or in the home office, mothers continued to bear the main burden of family management, albeit much less so than in academic families.

The  pandemic acts like a magnifying glass on gender equality. But in view of the current state of knowledge, the generalizing claim that Corona reactivates role models believed to be outdated is wrong.

The  glass can always be seen as half empty or half full. Empirical findings based on pre-crisis comparisons speak for the half-full glass.

The  corona crisis can also become an opportunity for both genders and to stimulate the change in role relationships. Quite a few men have recognized the value of caring work from personal experience, which is why they are gradually deciding to become more involved in everyday family life. And some mothers are also increasingly willing to deviate from their standards and give their partner at home more autonomy. If he can put the dishwasher in the way he sees fit or if he can serve the children a ready-made pizza without their intervention – then couples take a small but important step towards gender equitable households.

Family hardship fund is expanded to include farmers 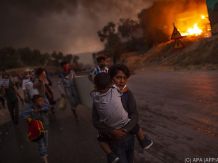 “UNICEF Photo of the Year” shows children from Moria – Politics...