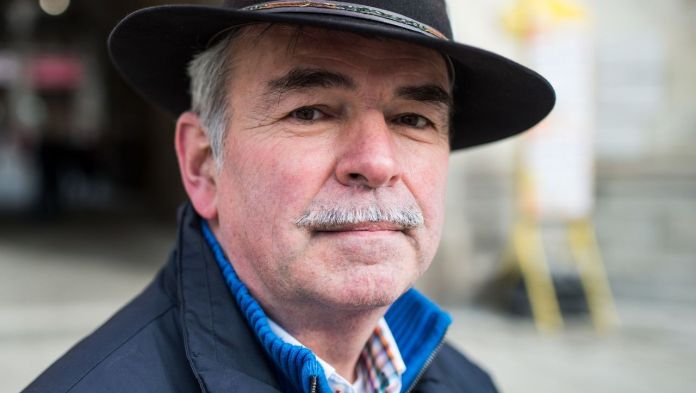 Justice victim Gustl Mollath wants to leave Germany. “I would like to leave the country,” said the 64-year-old in Munich on the occasion of the publication of a new book entitled “State Crimes –  The  Mollath Case” this Monday. “You can’t rely on this country at all,” said Mollath.

The  book was written by the lawyer Wilhelm Schlötterer.

Mollath currently lives in northern Germany, where he says he is trying to gain a foothold. In the long term, however, he would be »happy if I could find any place in the world. I don’t want to have to stay in Germany, especially in Bavaria. “With a view to the federal election in September and Bavaria’s Prime Minister Markus Söder (CSU), he said:” I will be able to vote again for the first time this time and I have to expect Söder the next chancellor is. That accelerates my desire to leave the country. ”

The  Nuremberg Mollath was admitted to psychiatry in 2006 after a trial for alleged violence against his wife – wrongly, as it turned out years later in a retrial. By then he had spent 2,747 days in a psychiatric hospital.

Nobody believed his story about his wife’s illicit business, who worked as a banker. Instead, it was included as evidence of his confusion and paranoia. His case was later reopened, he got out of psychiatry. Authorities and politicians – above all the then Bavarian Justice Minister Beate Merk (CSU) – came under pressure.

Author Schlötterer, who played a key role in Mollath taking up and winning the fight against the Bavarian justice system, traces the case. In his book, the lawyer once again raises serious allegations against Bavarian politicians. “Other people are being played badly here in Bavaria, but the Mollath case was an excess,” Schlötterer said now. “It wasn’t a miscarriage of justice, it was a state crime.”

The  former civil servant Schlötterer has been an opponent of powerful CSU politicians for decades. As a tax officer, he made a name for himself at the beginning of 1993 by clearing up the so-called amigo affair, which led to the overthrow of the then Prime Minister Max Streibl (CSU).

And even today he sees the CSU leadership as the source of all evil – especially in the Mollath case.

The  party has simply been ruling the Free State for too long and too uncontrollably. “

The  CSU has been in power here for decades and the judicial institution is completely dependent,” said Schlötterer.

“In my estimation, the Mollath case could only take place in Bavaria and not in any other federal state. Here the public prosecutor is firmly in political hands. That creates a tendency for the judicial authorities to only act according to the wind. «He assumes that the black money deals should be covered up because the Free State of Bavaria was involved in the bank.

Even if the Mollath case highlighted abuses in the penal system in Bavaria – from the point of view of Schlötterer and Mollath, far too little has changed since then. “It’s like with a wild dog: you throw a bone at it for a moment to keep it calm and then don’t bother about it. I don’t see any real improvement. ”

The  Bavarian Ministry of Justice, now headed by Georg Eisenreich (CSU), sees the matter differently than Mollath and Schlötterer: “

The  Bavarian judiciary dealt intensively with the criticism at the time,” said a spokesman. He pointed out that the Free State had “played a major role” in dealing with “structural deficits in the federal regulation on placement in psychiatric hospitals.”

Almost 2900 people in Bavaria in the penal system

In the meantime, according to the Ministry, thanks also to a Bavarian initiative, the Criminal Procedure Code stipulates that people who are housed are regularly assessed by external experts whose qualifications are now subject to “increased requirements”.

At the end of 2019, according to the Bavarian Ministry of Social Affairs, 2,884 people were in prison in the Free State. In the previous year there were 2772, at the end of 2017 there were 2489. Those who were accommodated because of a mental illness spent an average of 5.42 years in psychiatry in 2019; addicts stayed there an average of 1.42 years.

Mollath, who sat in psychiatry for more than seven years, received a total of around 670,000 euros in compensation from the Free State after a legal dispute before the Munich I Regional Court, he originally demanded 1.8 million euros.

Long backlog: trucks roll back to the English Channel – politics

Demands for a plan for opening steps are getting louder –...

The next shutdown could take longer than you think

GNTM (ProSieben): Barbara Meier is now married to a billionaire

Android app helps you in the jungle of messenger apps