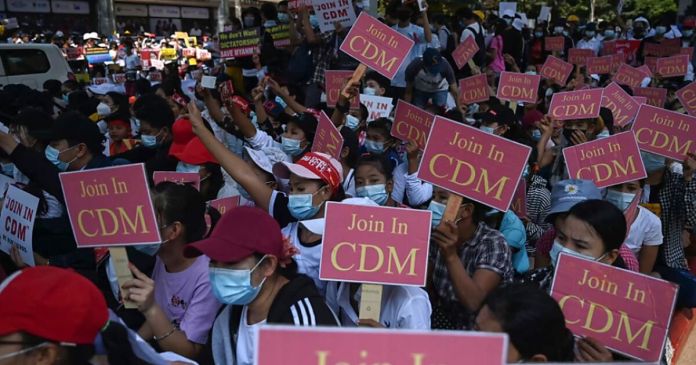 Security forces in Myanmar had previously used massive violence against demonstrators. At least two people were shot dead on Saturday in the second largest city, Mandalay, and around 30 other demonstrators were injured.

The  security forces fired live ammunition at the demonstrators.

According to Reuters, the police also arrested the famous actor Lu Min, who was on the military’s wanted list. This is what his wife, Khin Sabai Oo, said on Sunday. According to activist group Assistance Association for Political Prisoners (AAPP), 569 people were arrested, charged or convicted in connection with the coup on Saturday. Facebook, meanwhile, deleted the military’s main page with reference to its policies that would prohibit incitement to violence, the company said.

The re has been an uproar in the Southeast Asian country since the previous de facto head of government Aung San Suu Kyi was ousted in a military coup on February 1. Hundreds of thousands of people have since participated in street protests.

USA: Why Secretary of State Mike Pompeo is not coming to...

Airbnb is worth more than $ 47 billion on the exchange

For Poland’s government, Germany is the betterwessi

This is how many ships the Carnival Corporation needs to break...