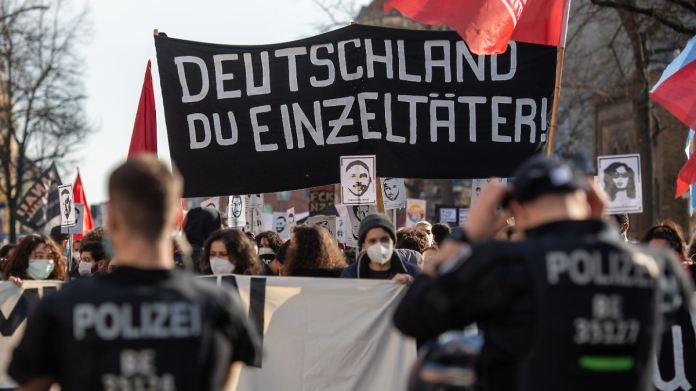 “Hanau was not an isolated case”
Thousands remember victims of terror

The y shouldn’t be forgotten: the nine victims of the right-wing terrorist attack in Hanau. Thousands of people took to the streets a year after the attack in Berlin. Before that, there had already been commemorative events on site.
Thousands of people remembered the victims of the racially motivated attack in Hanau, Hesse, a year ago at a demonstration in Berlin. According to a police spokesman, around 4,000 participants had gathered in the Neukölln district by the afternoon.

The  protesters held up signs and photos with the names of the nine killed. “Hanau was not an isolated case” was written on posters. In the course of the afternoon, more and more demonstrators joined them. Originally 900 participants were registered. According to the police, the situation initially remained calm and relaxed.

According to the police, the memorial events in Hanau were also calm and peaceful.

The  police did not have to intervene, said a spokesman. Late on Friday evening, dozens of people at the crime scenes in Hanau at the time remembered the nine victims.

The y gathered in silent memory at the exact times when the assassin fired the shots in the city center on February 19, 2020 and shortly afterwards in the Kesselstadt district.

Hanau’s Lord Mayor Claus Kaminsky came to the crime scene in downtown Hanau and lit a candle on a plaque with pictures of the dead. Previously, the dead had been commemorated in an event with Federal President Frank-Walter Steinmeier and Hesse’s Prime Minister Volker Bouffier.

The  act had caused great horror not only in Germany.

The  43-year-old German Tobias R. shot nine people with foreign roots in several places in the city in the Rhine-Main area on the evening of February 19, 2020, before allegedly killing his mother and then himself. He had pamphlets beforehand and videos of conspiracy theories and racist views posted on the Internet.

The  “February 19th Hanau Initiative” speaks of a “failure of the authorities before, during and after the crime”.

GNTM 2021: That’s why the candidate Ricarda is no longer there