Hartberg and Ried missed a leap forward in the Bundesliga table in the 18th round.  The  Oststeirer and the Innviertel parted on Saturday evening with a 1-1 draw. Dario Tadic equalized in the 28th minute the early Rieder lead by Stefan Nutz (3rd). By sharing the points, the Hartbergers gave a better starting position in the race for the championship group, they are now ninth. Ried still ranks tenth.

After the success against Austria last weekend, the home side also failed to achieve two successes in a row for the first time this season. Both Markus Schopp and Miron Muslic, who has to wait for his first Bundesliga victory as a coach, sent their teams into the match with identical lineups compared to the previous round.

The  Riedern managed a dream start into the game. Nutz hit in the third minute with a placed low shot from around 18 meters into the far corner.

The  Innviertel team, who mostly exerted pressure on the right side, took this momentum with them in the first 20 minutes of the game. An insufficiently precise free kick by Marco Grüll (14th) and an offside goal by Luca Meisl (16th) were further good actions by the guests in the early stages. A conclusion from Patrick Schmidt after a cross by Michael Lercher also went over the gate (18th).

The  TSV striker was left completely alone in front of the goal and was able to use a Manfred Gollner cross undisturbed. Ried goalie Samuel Sahin-Radlinger kept his team’s draw in stoppage time in the first half by parrying a dangerous header from Thomas Rotter.

After the break, both teams hardly found any significant chances for long stretches. On the one hand, the Hartberger had more play at times, on the other hand, a too weak header from Grüll in the 61st minute brought nothing to the Riedern. For a long time there was nothing compelling. It was only in the 83rd minute that Nutz almost hit after a stab in the Hartberger penalty area, but the ball went over it. In the 93rd minute Stefan Rakowitz had the winning goal for the home side after a good combination, but failed to Sahin-Radlinger.

On Saturday, Austria Wien approached the championship ranks in the football Bundesliga up to three points.

The  Viennese defeated SCR Altach after a 0-1 break deficit 5-1 and have the WAC (in action on Sunday) and WSG Tirol in sight.

The  Tyroleans had to admit defeat to SKN St. Pölten 0: 1, which means that the Lower Austrians are only four points short of the top six. Hartberg and Ried parted with a 1: 1.

The  top teams are in action on Sunday. Sturm Graz receives the WAC, the LASK is guest at the bottom of Admira (both 2.30 p.m.). At the end of the 18th round, the top game between leaders Red Bull Salzburg and pursuers Rapid will start at 5:00 p.m. (apa)

Football: LASK gives the starting signal for the women’s team

Nove Mesto: Denise Herrmann is on the podium after catching up in the pursuit 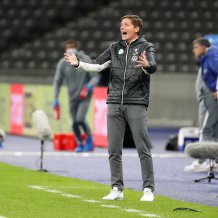 First league defeat since January 3rd: Glasner and Wolfsburg with a black week

Tyrolean golden boys! Greiderer and Lamparter combined to the title

“It brings more money than it costs!”

ICEHL-Preview / QR: All the facts about today’s playoff decision: – Hockey-News.info

Stuttgart: Two men in court for attempted manslaughter in the night...

Aggro Trump mob throws snowballs at the Berlin US consulate –...

First collective deportation since the beginning of the pandemic – view

Analysis of the game: Karlsruher SC shares the points with table...

Niners with fourth defeat: 70:83 against Frankfurt