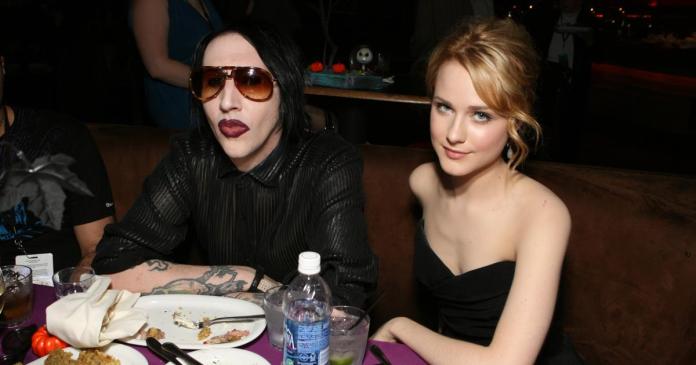 The  abuse allegations against Marilyn Manson are not waning. His ex-fiancée Evan Rachel Wood is now unpacking more details from their relationship –

The  musician is said to have made anti-Semitic remarks and repeatedly used the N-word.

Wood’s mother converted to Judaism and raised her daughter Jewish. Manson is said to have made fun of the actress who has no “Jewish blood”. “He called me ‘Jewish’ in a derogatory way. When he was angry with me, he would paint swastikas on my bedside table,” Wood wrote on her Insta story.

In several pictures that she posted in her Insta stories, Evan Rachel Wood pointed out the hidden symbolism of Manson’s tattoos: the musician had two hidden swastikas and a skull sign from the Waffen-SS, according to the actress.

The se tattoos are said to have emerged only after their failed relationship.

Model Ashley Lindsey Morgan also confirmed Marilyn Manson’s fascination with National Socialism. Manson forced her to get Nazi memorabilia for him, even though she is of Jewish descent. “I had to buy him throwing stars and knives with swastikas forged on them,” Morgan said on Instagram.

The  model also reports sexual abuse, and Manson is said to have been violent towards her. “He convinced me that if he cut me with a knife, burned me, or hit my mouth with his fist, it was ‘our thing’,” wrote Morgan. According to her own statements, the model still suffers from anxiety.

More and more women are now speaking up and sharing similar experiences they had during their relationships with Manson. Manson denies the allegations.

Millions of Android smartphones infected: which app you need to remove...

Massimo turns 40: This is how his “Let’s Dance” career started

Coronavirus in Berlin: How it works with the free rapid tests