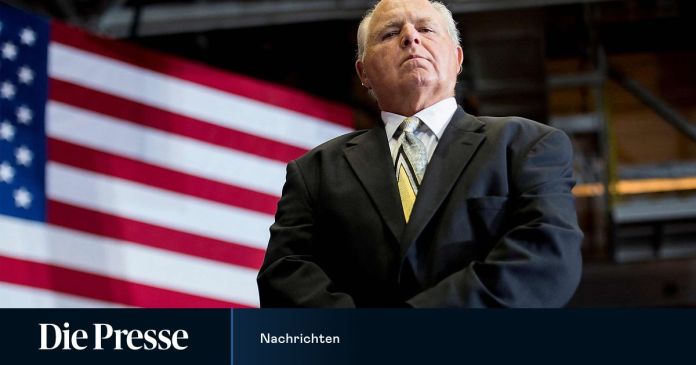 Rush Limbaugh was arguably the most influential media voice on the American right. In the previous year he was honored with the Freedom Medal by ex-President Trump.

The  ultra-conservative American talk show host Rush Limbaugh is dead. He died of cancer at the age of 70. Limbaugh is considered the inventor of the political radio talk show and has established himself as the leading voice of the American right in the media over the past three decades.

Limbaugh had already passed his zenith as the figurehead of the right and the hatred figure of the left. Meanwhile, Sean Hannity, Alex Jones, Mark Levin are more influential and sometimes even more brutal than the man who, at his best, reached 20 million listeners on 600 radio stations on his three-hour midday talk show, made $ 40 million a year and got a private jet acquired.

Born in southern Missouri to a prominent Republican activist, Limbaugh was well aware of his political influence. In 2008 he described himself as the “intellectual engine of the conservative movement”. His daily radio show was taken over by over 600 radio stations across the country and had a loyal audience of millions.

One day after he announced his cancer diagnosis in February 2020, US President Donald Trump honored him with the highest honor the United States has in store for a civilian. During his State of the Union address, Trump had his wife Melania present the Medal of Freedom to the journalists invited to the solemn session of Congress.

The  moderator of the “Rush Limbaugh Show” caused quite a stir with controversial statements, for example when he insulted women’s rights activists as “Femi-Nazis”. He had to apologize to actor Michael J. Fox for the allegation that he was exaggerating his Parkinson’s disease.

Limbaugh’s favorite enemy was Trump’s predecessor Barack Obama, whom he continued to attack even after his term in office ended in 2017. For Trump, Limbaugh was a loyal ally. He downplayed the coronavirus as a “common cold”, which is abused by the “mainstream media” to reduce Trump’s chances of re-election. Limbaugh repeatedly fed conspiracy theories of a “deep state” and in this way offered Trump flank protection. After the Capitol storm, Limbaugh also showed sympathy for political violence.

Limbaugh discovered radio at the age of 16 when he acquired a broadcast license in a summer course and started working for a local radio station. Reluctantly, he enrolled at university, but his student days were over after a year. “I just wanted to be on the radio,” he later recalled.

Limbaugh invented the type of conservative talk show host, who is now a big crowd. In terms of content, he prepared the ground for right-wing populists like Trump by crossing borders. While he had no resounding success with a foray into television in the mid-1990s, Limbaugh remained unmatched in his profession. “I have no competitors,” he said in a 2008 interview with the Times. “(Fox News star host Sean) Hannity can’t hold a candle to me.”

How Proper Dental Care Can Prevent a Severe COVID-19 Course

Smartphones from this manufacturer will soon only be cheap Chinese goods

The head of the VW supervisory board advises on Tuesday about...

Belgium is taking an “Easter break” – for four weeks

Johnson wants to convince critics of the Brexit trade pact

School start: witness appointments and exams will be postponed