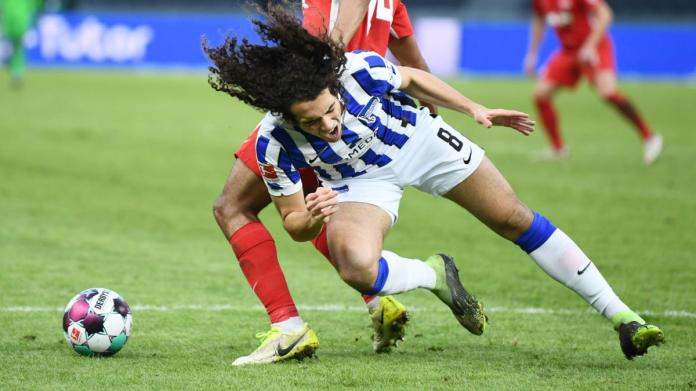 RB Leipzig makes the title fight in the league exciting again with the victory in Berlin.

The  team is only two points behind FC Bayern. For Hertha, on the other hand, it looks increasingly gloomy.

RB Leipzig took advantage of Bavaria’s next mistake, the title race is really exciting again. With an artificial shot from Marcel Sabitzer (28th minute), a cracker from Nordi Mukiele (71st) and a header from Willi Orban (84th), the Saxons won 3-0 on Sunday at Hertha, which is still in acute danger of relegation. 0).

The  second in the table reduced the gap to the record champions from Munich on the 22nd Bundesliga matchday to just two points.

One day after FC Bayern’s 2-1 defeat at Eintracht Frankfurt, the people of Leipzig initially needed a bit of a fuss in order to confidently collect all three points against the Berliners who were by no means without a chance. Without the necessary effectiveness, Hertha BSC would be stuck in the table cellar for a long time. Now waiting for the table 15. VfL Wolfsburg as the next top team.

Without the future Munich Dayot Upamecano in the defense center, RB entered the Olympic Stadium. Overall, coach Julian Nagelsmann reacted to the disappointment in the Champions League against Liverpool on Tuesday with four changes. In the storm, alongside Yussuf Poulsen, Hee-chan Hwang was allowed to play in the Bundesliga for the first time from the start. After four minutes, the South Korean escaped after a positional error from Hertha’s starting eleven debutant Marton Dardai, but failed at the brilliantly reacting goalkeeper Rune Jarstein.

Hertha with a new tactical order

Hertha coach Pal Dardai had said before the kick-off that his son would be entitled to “five to six mistakes” like any newcomer. But the 19-year-old quickly got into the action. Sami Khedira was also there for Berlin for the first time from the start and, despite the apparent lack of liveliness, ensured the stability in the center that was hoped for. This time the power lasted for 67 minutes.

Hertha even took the initiative in the new 3-4-2-1 concept and had a good chance of taking the lead. Krzysztof Piatek (17th) just missed a cross, shortly afterwards the Pole was surprised (20th) that the ball fell in a good position at his feet. Lukas Klostermann (22nd) saved just enough from Dodi Lukebakio, who was ready to shoot, and a solo by the very committed ex-Leipzig player Matheus Cunha (26th) was stopped by the RB defensive just in time.

The  shock for Hertha came a little later. Lucas Tousart did not disturb Sabitzer energetically enough with the long-range shot. At an incredible angle, the ball fell into the goal behind the amazed Jarstein. Sabitzer – one of Leipzig’s unlucky passers-by in the 2-0 draw against Liverpool in the premier class – almost had a free kick (35th).

The  Berliners did not give up and had a double chance to equalize immediately after the break. Lukebakio (50th) and Matheus Cunha (51st) awarded free in front of RB goalkeeper Peter Gulasci.

The  game was now completely open. Leipzig also pressed on another goal. Hwang (57th) didn’t aim precisely enough. Shortly thereafter, Marcel Halstenberg tried in vain with a header. Substitute Mukiele did better after a mistake by Mattéo Guendouzi, who threw the ball into the near post. Now Hertha had no more energy to catch up and even conceded the third goal.

Coach Pal Dardai sees no reason for excessive concern in the relegation battle even after Hertha BSC’s eighth game without a win. “

The  result is sad. We kept marching and trying, “said coach and demanded:” We just have to stay calm, don’t panic. “

The  Berliners are still very close to the relegation zone, level on points with Bielefeld, the Mainz on the Vormasch in the neck. “You already knew it would be difficult,” said Dardai about the difficult program. After Wolfbsurg, FC Wolfsburg will be visiting Berlin, after which Hertha will have to compete at Borussia Dortmund. Even Leipzig’s coach Julian Nagelsmann admitted: “

The  opponent was good today.”

The  victory was a bit too high.

This Leipzig praise is of no use to Dardai. Even after four games since taking over from Bruno Labbadia, Hertha has not won under the club idol. Dardai tried a back three against Leipzig, including his 19-year-old son. “We tried that today. We’ll vary that, ”said the coach.

But the problem in Berlin was the offensive. In rows, good chances were given away. “You can’t do anything about that. Practice! ”, Said Dardai about the possibilities of his offensive players Matheus Cunha, Krzysztof Piatek and Dodi Lukebakio. “Stay tuned. Work. At some point the knot will burst, ”said Dardai.

Revision of the security concepts: Ski areas were partially overrun

She packs her bags in Saterland and leaves

The police are looking for a missing ten-year-old – still no...

Police expect up to 1000 participants: Corona demo in Wohlen AG