On the same day as the Queen, Harry and Meghan will speak out on their lives in a highly anticipated US broadcast. Is that why Queen Elizabeth addressed the nation beforehand?

Just hours before a highly anticipated interview of her grandson Prince Harry and his wife Meghan is broadcast, Britain’s Queen Elizabeth II will deliver a televised address on Commonwealth Day. Westminster Abbey announced on Monday that the address would be broadcast on a special broadcast on BBC One on March 7th. It replaces the service that normally takes place in the cathedral on Commonwealth Day, which has to be canceled this year due to the corona pandemic.

Harry and Meghan have announced an “intimate” interview with US star presenter Oprah Winfrey for the same day. It is expected that the two will explain their withdrawal from all royal obligations in it from their own perspective.

Prince Harry and former US actress Meghan Markle married in May 2018, and their son Archie was born a year later. At the end of March last year, the couple surprisingly withdrew from the front row of the British royal family and declared that they no longer wanted to attend any official appointments on behalf of the Queen.

Last week, the royal family announced that one year after the move referred to by the British media as “Megxit”, they are now losing their last royal honorary titles and positions of honor.

The  small family now lives mainly in Meghan’s US home, California – in a villa in the coastal city of Santa Barbara. On Valentine’s Day, the couple announced that they were expecting a second child.

Netflix series “House of Money” gets a remake – Tv

Displayport 2.0 should now start towards the end of 2021 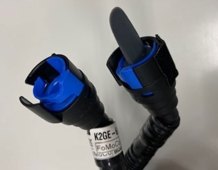 Ford is the first automobile manufacturer in Europe to use Formlabs...

Nature in the USA: The best shots of the volcano eruption...

In the middle of Hamburg – man pees on the roadside...