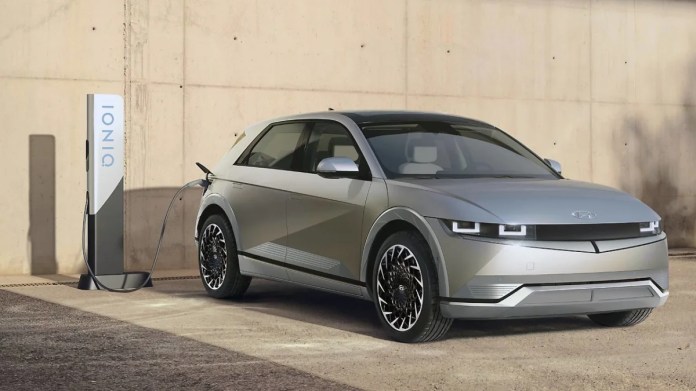 The  Hyundai Ioniq 5 is the new benchmark in charging electric cars, at least in its class.

The  battery voltage is designed for 800 volts, which is twice as high as is usual in this segment. It is the first electric car to be based on the South Korean company’s Electric Global Modular Platform (E-GMP).

The  result of the voltage increase:

The  maximum power when charging is 220 kW. With the competitor VW ID.4 it is currently 125 kW at best.

Even more impressive is Hyundai’s promised time of 18 minutes for charging from ten to 80 percent. That means an average charging power of 169 kW for the larger battery with 72.6 kWh and for the smaller one with 58 kWh of 135 kW. Values ​​that are otherwise only achieved by the Porsche Taycan, which, however, belongs to a different price and vehicle class.

The  funding is not taken into account. For this course there is the smaller battery with rear-wheel drive, a three-phase AC charger with an output of eleven kW and a number of assistance systems from adaptive cruise control to navigation.

The  Ioniq 5 is considerably larger than the proportions might suggest. With a length of 4.64 meters, it towers over the VW ID.4 by six centimeters. Because the rear of the Ioniq 5 slopes downwards, the direct competitor is actually the VW ID.5, which will not be presented until the third quarter of 2021.

The  width of the Hyundai CUV is 1.89 meters and the height 1.61 meters. What makes the Ioniq 5 look like a compact car is the huge wheelbase of three meters. For comparison:

The  body overhangs of the Hyundai appear correspondingly short, and the rear seat can be moved.

The  two battery sizes mentioned at the beginning of 58 and 72.6 kWh – given as a net value at Hyundai – are each available with rear-wheel or all-wheel drive. So there are four variants, which in turn can be combined with various equipment packages.

Hyundai has not yet given an indication of the ranges because the homologation has not yet been completed. However, according to the WLTP, clearly more than 400 km for the small and more than 500 km for the large battery can be assumed.

The re is also no information on weight. It should start at an estimated two tons.

The  Ioniq 5 can therefore not be a saver when it comes to electricity consumption like the Ioniq. Size and weight will take their toll. Good on the other hand: Hyundai is assuming a trailer load of around 1.6 tons (VW ID.4: 1 ton); the final value will be published after the homologation. A volume of 540 liters (ID.4: 543 liters) is specified for the trunk, and there is a small frunk at the front.

Visually, the Ioniq 5 quotes the Hyundai Pony from the 1970s. Like it or not. It is noticeable that Hyundai does not follow a uniform design language for electric cars. In any case, the Ioniq 5 appeals to those interested first who are enthusiastic about technical content.

Hyundai offers them even more.

The  right rear charging socket on all Ioniq 5s can be converted into an external 220-volt socket. Even the output is like at home: 3.5 kW are output in one phase. Hyundai calls this feature V2L, Vehicle to Load. A kind of driving super power bank. It is not yet clear whether the second 220-volt socket with 3.5 kW in the interior will be standard or optional. V2L is available from a battery charge level of 15 percent and up.

The  Hyundai Ioniq 5 sets a new standard in its class with its 800-volt storage system.

Both the traction battery and the on-board network battery can be charged via a solar roof for an additional charge of 1290 euros.

The  power of the panel is 205 watts. So, depending on the parking lot, it will take a very, very long time before it pays off financially, if at all. But that’s probably not what the customer is interested in – it’s just nice to see when the battery fills up while standing around, albeit very slowly.

Head-up display all over the windshield

In addition to the aforementioned sliding back seat, the Hyundai Ioniq has 5 electrically adjustable seats in the front.

The re is also a head-up display that uses the entire windshield as a projection surface.

The  usual armada of assistance systems is of course also available. A route planner is standard and (at least) the radio navigation system can get an update over the air (OTA). Hyundai Germany has yet to determine whether the heat pump will be standard in all models. Production of the Hyundai Ioniq 5 will start in the first quarter of 2021. Including shipping to Germany, the delivery of the starter version “Project 45” can be assumed in May and the other models in July.

Competition under pressure to act

With the E-GMP, Hyundai is raising the bar for electric cars a little higher.

The  competition will follow suit and also have to build on 800 volts. And because that doesn’t happen overnight, the Ioniq 5 has a medium-term lead on the charging station. For customers for whom the CUV is too big, too expensive and too inefficient, the economical Ioniq (test) and the smaller Kona (test) remain. But they look somehow old – just like the direct competitors of the Ioniq 5.

The  power outlets (V2L) and the solar roof also make the technology fun. And if you are bothered by the shape, you will soon get an alternative on the same basis from Kia.

Uruguayan Abreu has changed football club for the 30th time

TUI is building more on tests than vaccines in 2021

Corona: So far no references to “P.1” variant in Austria

BioShock 4: will it be an open world game?

Oil prices under pressure due to economic worries