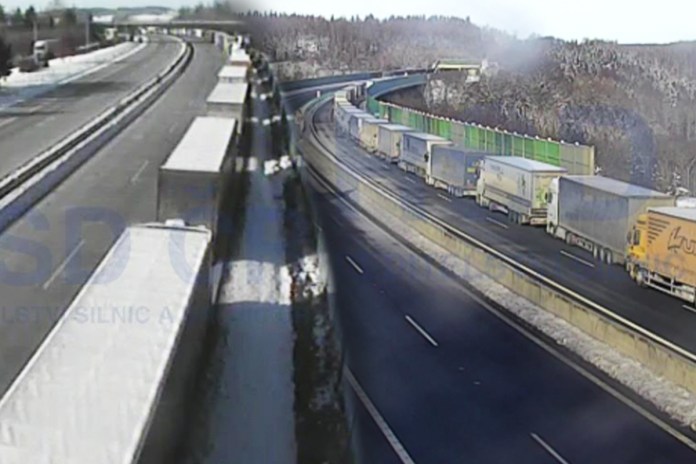 Highways in the direction of Saxony and Bavaria dense: trucks jam for miles

The  Czech motorways towards Germany are tight. Many trucks are jammed for several kilometers because not everyone is allowed to go to Germany.

The  federal government had declared the neighboring country to be a virus variant area and reintroduced stationary border controls.

On Monday morning, the trucks backed up to Usti nad Labem (Aussig on the Elbe) on the E55 / D8 Prague-Dresden (A17) motorway.

The  backwater was around 20 kilometers long.

The  police regulated entry into the tunnels.

On the E50 / D5 in the direction of Nuremberg (A6), a convoy of trucks more than 20 kilometers long temporarily formed. That emerged from the information provided by the motorway administration and traffic information.

The  Czech Republic with its suppliers is also an “extended workbench” for many German companies. Since Sunday, only Germans and foreigners with a residence and residence permit in Germany have been allowed to enter from the neighboring country.

The re are exceptions for health workers, truck drivers and other transport personnel in freight traffic.

You have to register digitally and show a negative corona test at the border, which must not be older than 48 hours.

The  Czech authorities have therefore increased the capacities of the test centers in the border area and set up additional smear points with the help of the fire brigade.

The re have been more than a million infections and 18,250 deaths since the pandemic began.

The  EU member state has almost 10.7 million inhabitants. According to the latest information from the EU health agency ECDC, there were statistically around 177 Covid-19 deaths per million inhabitants in the Czech Republic within 14 days; for Germany the value was around 115.

Later election victory thanks to Congress ?: Trump calls for the...

Well-known fellow actor about George Clooney: “It stank like a brewery”

Call for protests in Myanmar