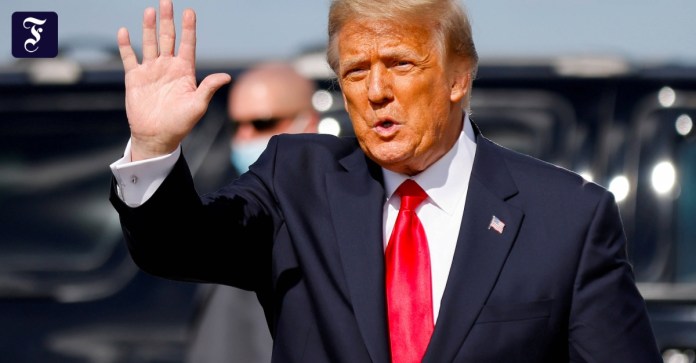 KShortly before the start of the historic, second impeachment trial against former President Donald Trump, his lawyers again sharply rejected the charges.  The  negotiation was a “brazen political act” with the aim of “silencing a political opponent and a minority party”, it said in a statement on Monday.

The  American Constitution does not allow impeachment proceedings against a president who is no longer in office. Giving in to the democrats’ desire for this “political theater” is a danger to democracy and civil rights.

The  Democrats and many legal experts reject this interpretation of the Constitution.

The  trial against Trump for incitement to riot begins Tuesday in the Senate. New President Joe Biden’s Democrats blame Trump for the violent storming of the Capitol on January 6, killing five. A conviction of the Republican is extremely unlikely.

17 Republicans would have to vote against Trump

The  question of constitutionality will be at the center of the first day of negotiations on Tuesday: the prosecution and defense will have four hours to present their positions, then the 100 senators will vote. If they vote for the process to proceed, which can be assumed, prosecutors and defense counsel will each have 16 hours from Wednesday to deal with the specific allegations against Trump.

Trump is the first president in the history of the United States to face a second impeachment trial.

The  Democrats in the House of Representatives handed the indictment to the Senate in mid-January. A conviction would pave the way to expel the Republican from public office and thus also to run again in the 2024 election. However, this would require two thirds of the votes. It is considered unlikely that the 17 Republican senators required for this will actually oppose Trump.

In an initial trial against Trump for his efforts to get campaign assistance from Ukraine, he was acquitted a year ago. Trump is also the first former head of state to face an impeachment process after leaving office.

The  Democrats accuse Trump of inciting radical supporters to storm the Capitol with an insurgent speech on the very day Biden’s election victory was to be finally confirmed.

“Thwart the peaceful transfer of power”

The  evidence of President Trump’s behavior is overwhelming,” said the nine Democratic MPs who lead the charges against Trump in the Senate on Monday. “His incitement to revolt against the government of the United States – with which he thwarted the peaceful transfer of power – is the worst constitutional crime ever committed by a president.”

According to media reports, the Democrats want to show extensive video footage of Trump’s performances and the storming of the Capitol during the process. You want to lead an emotional charge that is not only aimed at the senators, but at the entire public.

The  senators take the roles of jury in the trial.

According to a survey by the polling institute Ipsos, 56 percent of citizens are of the opinion that Trump should be convicted and excluded from future offices. For Republican supporters, however, it is only 15 percent.

While the Democrats want to hold Trump accountable for his behavior after the election, there are also major reservations in the ruling party against a long impeachment process: Many argue that it is more important to get the corona aid planned by Biden on the way quickly .

As has since been announced, the deployment of the National Guard to secure the Capitol in Washington will cost almost $ 500 million by mid-March. So far, 284 million has been estimated for personnel and another 199 million for general operating costs, said Defense Department spokesman John Kirby on Monday.

The  National Guard had moved in to reinforce local security forces after the forcible storming of the Capitol. As a result, more than 20,000 soldiers were temporarily active in the capital Washington.

The  security measures around the Capitol, the seat of the American Congress, have been significantly strengthened since then.

The  newspaper “Washington Post” had already reported last week about the costs of the deployment of the National Guard. At the time, however, the Pentagon did not comment on the cost.

Government before the end: Israel’s parliament votes for dissolution

Knossi becomes the presenter of “Daily freshly roasted” on RTL and...

Pichler apologizes to Ingolitsch: “Was not an intention”