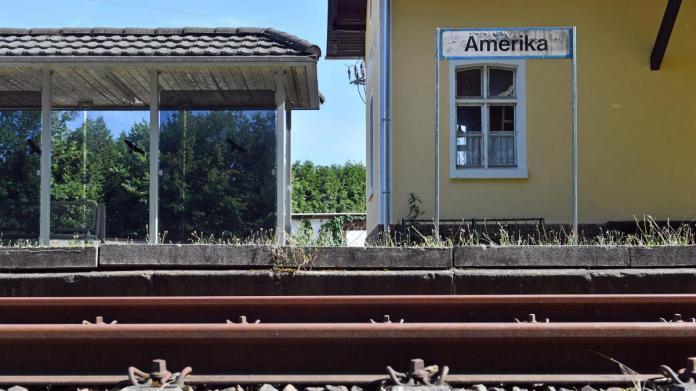 Egypt is around the corner from Cottbus, Tokyo in Düsseldorf and Russia around Potsdam. And Cameroon has the postcode 17192, by the way. An amazing journey through its own country.

Avoid long journeys, especially air travel, and avoid overtourism is the order of the day. And it’s so much fun to be in Hamm or India
Japan in
Düsseldorfto experience all climate zones of our earth in one house or the most crooked tower in the world at home.

Cameroon has the German postcode 17192, belongs to goods on the banks of the Müritz and is in the middle of
Mecklenburg-Western Pomerania. Population: 300. Of course, Africa is also close by: 80 kilometers northeast of Berlin in the country
Brandenburg. German Africa has fewer inhabitants than 17192 Cameroon, but at least it has its own bus stop. Just like Canada on the highway between Kleinbernsdorf and Schöna in
Thuringiawhile in America – zip code 09322 in
Saxony –  The  station was put into operation as early as 1874.

The  largest Hindu temple in Europe is in Hamm

Germany’s exotic destinations are not just small villages and hamlets with big names, but pyramids and temples, river landscapes and even entire cities. “Why look into the distance? See, the good is so close, ”Johann Wolfgang von Goethe already knew. And Germany suddenly becomes my new territory.

Who knows that the world’s first oil well did not take place on the Arabian Peninsula, but near Celle. And how do pyramids come to Germany? One of the most beautiful landscape gardens in the republic, the Branitzer Park – with two earth pyramids, is located southeast of Cottbus.

The y are the only ones in Europe! Prince Hermann von Pückler-Muskau had the masterpiece of garden art laid out in the 19th century and buried there in a pyramid.

The  idea came to him during his long trip to Egypt.

The  largest Hindu temple in continental Europe is in Hamm in Westphalia: the Sri Kamadchi Ampal temple. How did he get there? “It was God’s will,” says Priest Arumugam Paskaran. “During the train ride from Berlin to Paris I was suddenly very hungry and I just got off. That’s how I came to Hamm. And I stayed. ”But you can also enter into dialogue with foreign cultures in other places: In Miltenberg, Franconia, for example, at the Jewish cemetery there: it is small, but in many ways ahead of its famous large counterparts in Jerusalem or Berlin and Prague. A QR code gives you access to documentation with a site plan and all grave inscriptions. A place full of calm and grace, a place to pause and an oasis that you usually have all to yourself.

Little Tokyo is located in Düsseldorf

In Japan they say: an onsen cures everything, except love. And apart from an onsen, you can find almost everything about Japanese culture in Little Tokyo in Düsseldorf. A German might go to a Japanese temple there for the first time in his life, wondering about loads of Japanese characters and names, but also about Japanese longings, thick hair or sensitive noodles. And in Little Tokyo, the largest Japanese community in Europe, a Japanese person really only needs an onsen.

In Xanten one encounters ancient Rome and in Bad Frankenhausen Pisa. How crooked is that, one wonders when looking at the most crooked tower in the world in Thuringia:

The  tower of the upper church has an overhang of 4.60 meters and thus 70 centimeters more than the marble beauty of Pisa. Already in the 17th century it started to tilt and the tower should be demolished several times. Now it is said: From 2023 it should be accessible again.

The  Manhattan of the Middle Ages is still in Tuscany today: in San Gimignano.

The  Franconian answer to this is Dinkelsbühl with a tower parade, half-timbered houses and narrow streets: one of the best-preserved medieval cities in Germany. Dinkelsbühl is not an open-air museum, not a backdrop, but a living present paired with ancient history and a curious light switch with which you can illuminate the whole city.

The  strangest story is of course Potsdam and its Russian quarter Alexandrowka. On December 30, 1812 the state of war between Prussia and
Russia completed. King Friedrich Wilhelm III. and Tsar Alexander I approached and so it came about that 62 Russian soldiers who had come to Potsdam as prisoners were to remain at the royal court in Potsdam as a gift from the Tsar and form a Russian choir. Inconceivable today – reality back then! And the Prussian king had the Russian settlement built, which has remained almost unchanged to this day.

Spend the night like an Eskimo on the Zugspitze

In Germany you can spend the night on the Zugspitze in an igloo like an Eskimo or go skiing on volcanoes, with a view of crater lakes and 200 volcanoes with heights of up to 800 meters. What the Eifel is for winter sports enthusiasts with a penchant for the exotic, the quartz dune Monte Kaolino in the Upper Palatinate represents for desert fans.

The  Spreewald serves as a veritable substitute for the jungle and the Amazon, even if there are no alligators peeping out of the water or cheeky monkeys doing gymnastics in the trees.

The  atmosphere is still quite comparable! And in Bremerhaven’s Klimahaus you can go on a whole world tour through all of the world’s climatic zones.

You also save yourself a long flight if you drive to the fan-shaped city of Karlsruhe. It is clearly structured: 32 streets and paths point from the castle into the city like rays of sunshine. An absolutist city plan that US President Thomas Jefferson copied: he designed the new capital Washington based on this model.

The  famous city blocks were not invented in the States either – but in Mannheim, the square city in Germany. Baden-Baden competes with its beautiful Monaco Casino, which also applies to the Stone Bridge in Regensburg compared to the Charles Bridge in Prague. Regensburg was even the older model!

So you can discover parts of the world in Germany. Especially since the vast majority of Germans have always been on vacation in their own country and Germany has some of the cheapest ancillary costs in Europe.

The  distances are short in all cases and home can be pretty exotic or even curious! After some surprise you might even ask yourself the question: Do I really know my home country?

Samsung Galaxy S21: Samsung’s smartphones have to slim down

Dieter Hallervorden: “I’m glad to have been vaccinated!”