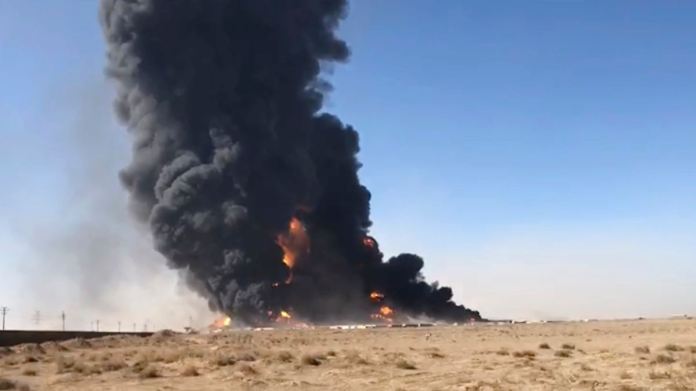 In a chain reaction, around 400 gas tankers go up in flames on the border between Afghanistan and Iran.  The  extent of the catastrophe cannot yet be estimated, and the cause of the explosions can only be puzzled.

The  police assume there is a leak.

In a border town in western Afghanistan, hundreds of gas tankers fell victim to an inferno of flames. Around noon, a tanker truck exploded near the border with Iran for an unexplained cause and triggered a chain reaction, as a border guard said. About 400 tankers were destroyed in the flames, said the official Mehrullah Balotsch in the city of Islam Qala. “We have not received any air support from any side, but twelve fire engines and crews are helping us from Iran.”

The  full extent of the destruction was unclear.

The  number of possible victims was also initially unknown because rescue workers stayed a safe distance from the fire.

TV pictures and videos on the Internet showed explosions, flames and an immense cloud of black smoke.

The  customs office in Islam Qala also burned down, according to the authorities. Seventeen people were taken to hospital in the provincial capital, Herat, several of them in critical condition.

The  cause of the accident was initially unknown, but the police suspected a leak in a tanker truck.

The  fire continued to rage after dark. Herat’s governor Wahid Qatali, who got a picture of the situation on site, assumed that the fire was going to be long: “We are doing our best to put out the fire,” he said. “We were worried about looting, but we prevented that. And we managed to move a few hundred cars away.”

The  estimated loss is several million dollars and the fire extinguishing work would have to be awaited for a final assessment, said Herat Chamber of Commerce chief Junus Kasi Sada

Qatali spoke of enormous damage to both the private sector and the public infrastructure. A trade route runs between Afghanistan and Iran in the border town of Islam Qala. For security reasons, the electricity connection to Iran was cut and consequently left the provincial capital Herat in the dark, as Afghan authorities announced.

Weilerbach: Son (38) is said to have killed mother and her...