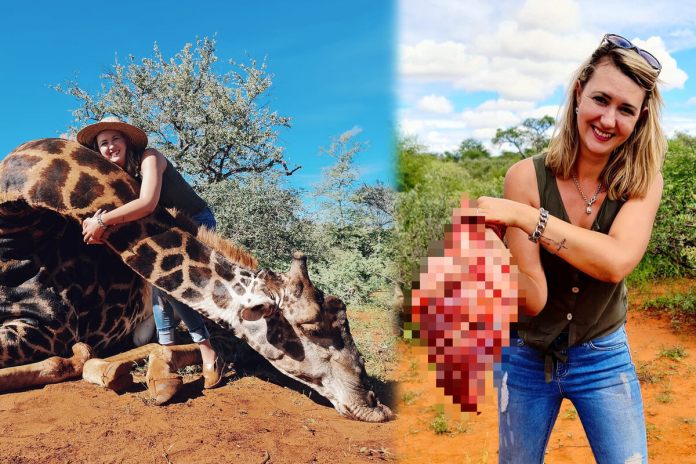 She calls animal welfare organizations “the mafia”: A 32-year-old huntress celebrates on Facebook that she shot a giraffe and receives a lot of criticism for it.

South Africa – She calls animal welfare organizations “the Mafia”: a 32-year-old Hobby-Jäger celebrates Facebookthat she shot a giraffe and has received a lot of criticism for it.

Merelize Van Der Merwe wrote on her Facebook channel last Sunday: “Have you ever wondered how big a giraffe’s heart is?” She also posted two pictures with that very animal organ in her hands and a satisfied grin on her lips.

The  32-year-old’s husband gave her the big game hunt for Valentine’s Day and she was “overjoyed” because of it. But not everyone on the Internet shares their enthusiasm for a shot dead giraffe.

The  heart post contains 500 likes as well as 450 angry and shocked reactions from Facebook users. One user commented: “This is sick. And it gets sick even more because she is so proud of it.”

But Van der Merwe does not seem to make much of this criticism. She adamantly claims that she was doing the wildlife a favor by shooting down. In addition, their hunt would have created “eleven jobs” and “plenty of meat for the locals” that day.

Opposite the British “Mirror“she asserts:” If you forbid hunting, animals become worthless and disappear. Hunting saved many species from extinction.

The  only ones who protect such animals are trophy hunters! “

Hobby hunter wants to make a carpet out of giraffe fur

She would have started her deadly hobby at the age of five and has since shot almost 500 animals, including elephants, lions and leopards.

The  blonde had been waiting for her chance to kill a giraffe for years: “I love its fur and the fact that it is such an iconic animal in Africa.” Now that she has shot the 17-year-old bull, she wants to turn his skin into a carpet.

With the bloody photos and videos on her Facebook channel (with almost 96,000 subscribers) she deliberately wanted to provoke the “animal welfare lobby”.

Merelize Van Der Merwe doesn’t think much of animal rights activists anyway: “I have no respect for them, I call them ‘the Mafia’!”

But the 32-year-old is not only criticized on Facebook, animal protection experts also make it clear how dangerous this type of big game hunt can actually be.

For example, Elisa Ellen from PETA told the “Mirror”: “Someone who kills a sentient being, cuts out its heart and brags about it, fits into the definition of a sociopath.”

Dr. Mark Jones of the British Born Free Foundation also made it clear that claims made by such hunters that they were just trying to protect the animals were “highly misleading”.

“Trophy hunting is neither an instrument for the preservation of animal species, nor does it provide significant financial benefits for the local communities,” said the animal rights activist.