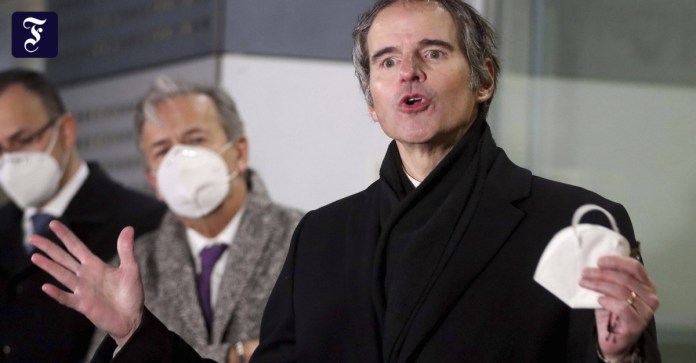 Dhe inspectors from the International Atomic Energy Agency (IAEA) can continue to examine the nuclear facilities in Iran, but to a lesser extent than before. That is the result of talks by IAEA Director General Rafael Grossi on Sunday in Tehran. After his return to Vienna on Sunday evening, Grossi spoke of a “good, sensible result” in view of a “serious situation”. A “preliminary technical agreement” had been reached for three months, which would give time for political negotiations.

Grossi had spoken in Tehran with the head of the Iranian nuclear program, Ali Akbar Salehi, about the future of the IAEA controls. He also met with Foreign Minister Javad Zarif. Iran announced last week that it would restrict IAEA inspectors’ access to some of its nuclear facilities from next Tuesday.

The  Iranian leadership is referring to a law that was enforced by the hardliners in Tehran last November. It prohibits the stricter control options to which Iran submitted in the Vienna Convention of 2015 (JCPOA), including the application of the Additional Protocol to the Non-Proliferation Treaty, which enables unannounced inspections.

Grossi now said there will continue to be “some sort of” unannounced inspections. Without being specific, he indicated that they would not be as far-reaching and effective as the previous ones, which are based on the JCPOA. Grossi said: “

The  law exists, it is applied.

The  additional protocol will not be applied. ”

The  IAEA will have less access to the nuclear facilities in Iran,“ we have to face that ”. But his agreement will continue to provide the “necessary” surveillance and security. “This is not a substitute, but a temporary solution.” In this way, a threatening “gap” is bridged and time is gained to conduct political negotiations, which, however, are not his job.

In a joint communiqué, Grossi and the Iranian atomic energy organization assured each other of the will to “cooperate and trust”. Three points were noted: Iran will fully comply with its basic obligations under the Non-Proliferation Treaty (i.e. without the additional protocol that Iran has not ratified). A “preliminary bilateral technical agreement” should enable the IAEA to continue its “activities necessary for verification and monitoring” for up to three months in accordance with Iranian law. Details are set out in a non-public annex. In addition, this agreement should be constantly checked whether it is fulfilling the intended purpose.

E-biker is seriously injured in collision with a car – BZ...

Book a vacation 2021: The most important tips for planning a...

Start of the corona tests for teachers in Bremen accompanied by...

This is the Corona vaccination plan for Brandenburg – BZ Berlin NBA: does the US professional league have to be interrupted? ...

What do you need to know about the audio app?