In an open game, the Dornbirn team fail again and again because of the sovereign Graz goalie Nussbacher or their own precision, while Menshikov comes to his first two goals in orange: Both times he unpacks an onimer from the right side and makes DEC keeper Östlund look bad (12th, 42nd).

Jevpalovs puts a backhander under the crossbar for an exciting final phase (50th), but the equalizer is no longer successful.

In Linz, Bratislava repeatedly fails due to the strong kickert, which is in the Linzer Tor for the first time since January 29th.

Because the VSV also got a 3-1 win at HC Innsbruck, everything comes together at the top. Collins (34th, 55th) and Pollastrone (59./EN) pull the game over to the Adler side after Gerlach equalizes in the last third (47th).

Dornbirn and Bratislava hold 12 points each, Graz and VSV each have 10 points, Linz follows with 9. Only HC Innsbruck is beaten with four points – the top 3 of the qualifying round get the playoff ticket. 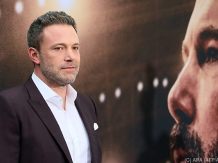 Ben Affleck tackles another directing project with a fantasy film –...

Lindvik hopes to start in Bischofshofen after dental surgery