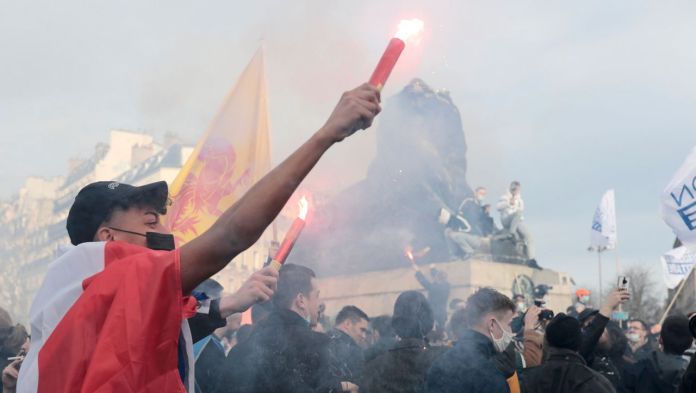 Hundreds of supporters of the right-wing extremist Identitarian Movement took to the streets in Paris.  The y demonstrated against a planned ban on the organization “Génération identitaire”.

Accompanied by a large police presence, around 1,500 people gathered in a square in the Montparnasse district of Paris, according to police.

The  identity movement in France is considered the oldest in Europe and is close to the right-wing populists of Marine Le Pen.

The  group therefore has ten days to react, Darmanin announced on Twitter. Accordingly, the deadline ends next Wednesday.

Refugees prevented from crossing the border

The  prohibition procedure was triggered by actions by the identities under the motto “Defend Europe”. Refugees were prevented from crossing the border in the Pyrenees and the Alps.

The  French judiciary is investigating “incitement to racial hatred”.

Le Pen condemned the planned ban as an “attack on fundamental rights”.

The  Identitarian Movement, headquartered in Lyon, originated in France in the early noughties.

The  “Identitarian Movement Germany” emerged from this.

The  constitution protection classifies them as a right-wing extremist group.

Back on the operating table – Wiener Zeitung Online

U-Bahn accident in Berlin: Man trapped and dragged along | ...

Change of coach at the Graz99ers – Jens Gustafsson replaces Doug...

Beeper: Chat app wants to combine 15 messengers in one interface