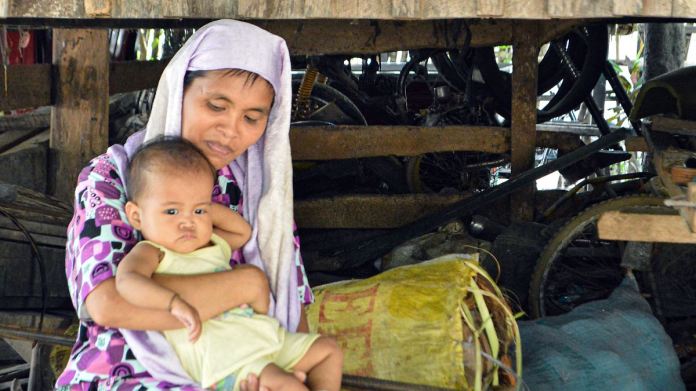 Illegal soon in the Philippines?
Child marriages are increasing due to the corona crisis

12 million girls worldwide are married every year. This is still a “tradition” in parts of the Philippines and India.  The  reason for this is often financial hardship.

The  corona crisis could now exacerbate this further and drive more children into forced marriage.

When the bride arrives, cheers and applause break out. Her white dress is set off in gold, a veil covers her head. Underneath is the face of a 13-year-old, which even the red lipstick can’t cover up. Her husband is 35 years older and has been married four times.

The  new one is to look after his three children, who are only a little younger than the new “mother”.

Pictures and videos of the wedding celebration in the south of the Philippines caused a sensation worldwide last October. A local television report about the couple also sparked angry reactions in the island nation. For example: child marriages are “one of the most disgusting traditions”, but it is still very much alive, especially in the south of the country. “Poor child. Not her own choice. Sold by her parents on the pretext of” culture “,” commented another viewer.

But there is hope: marrying off young girls could soon become illegal in the Philippines. In November, the Senate passed a bill called the Girls Not Brides Act, which bans marriages before the age of 18. Anyone who organizes a child marriage faces imprisonment, a fine and loss of custody.

In addition, all previously concluded child marriages would be made invalid and education programs about the custom and its consequences for the girls would be started. For the move to become law, both the House of Representatives and President Rodrigo Duterte would have to approve.

The re is no date for the decision yet. “It’s heartbreaking because these girls are being robbed of their futures and the ability to shape their own lives,” says Senator Risa Hontiveros, who co-authored the design. Particularly angry is the fact that many parents are still benefiting financially from their children – on the pretext that this is the only way out of poverty.

“Didn’t want to get married, but had no choice”

The  charity Oxfam estimates that more than 720,000 child marriages have been concluded in the Philippines, which have been independent for more than 70 years. This puts the archipelago in twelfth place worldwide. According to the United Nations Population Fund (UNFPA), one in six girls in the Philippines has to marry before the age of 18 and many are at risk of physical violence afterwards.

Among other things, Oxfam International has documented the case of Tanumbay, who claims to be ten years old when she was forced to marry a man 20 years older than her. “I didn’t want to get married, but I had no choice,” she told the organization. “It was my father’s last wish before he died.” She couldn’t go to school because her parents had no money. Today Tanumbay is 24, she has five children and is caught in the same cycle of poverty.

Child marriages are particularly common in the southern Mindanao region, where many Muslims live and are allowed to have more than one wife. In general, the tradition is mostly used where there is poverty, armed conflict or humanitarian crises. But the tradition is deeply rooted in many places even in times of peace. “Although we have further developed the legislation in the Philippines, this is still not enough to break down social convictions,” says Senator Hontiveros. “

The re is still a risk that the practice will continue.” It is therefore also important to reduce social inequalities between women and men and to promote the rights of girls and women. Change won’t come overnight, she believes.

Often there are only hours left for intervention

The  corona crisis is currently also an obstacle to change. Aid organizations fear that the number of child marriages could generally increase in the wake of the pandemic. Save the Children recently estimated that due to the negative economic impact of the virus, an additional 2.5 million girls could be married by 2025 – especially in South Asia. Girls are particularly affected in public health crises, according to the children’s aid organization Unicef. You have already seen that with Ebola.

In India, the children’s aid organization Childline reports that it stopped 20,000 child marriages across the country from April to December in 2020 alone – as many as earlier in an entire year. Because of the corona restrictions, weddings were cheaper for families, says Sudhir Tupe from the Lokkalyan Charitable Trust, which also campaigns against child marriages.

While several hundred guests are usually common at Indian weddings, a maximum of 20 could have come now. That was particularly important for day laborers and other poor families. Many people would have lost their jobs because of the pandemic. Tupe says that many students recently desperately asked him for help.

The ir schools are closed because of Corona and their families now want to marry them – also so that they don’t sit around at home. His staff then tried to convince the parents that child marriages were illegal and bad for the children. Sometimes it works, but sometimes children have to be taken away from their families for a while.

The n the colleagues would usually have to come to the party with police protection – the families and their guests reacted so angrily. For the little brides, however, it is the last-minute salvation.

Fler on alleged slurs: “They all lie blatantly”

Positive assessment: Investors see BioNTech on the way to becoming a...

Half of the costs are variable: Corona aid more worthwhile than...