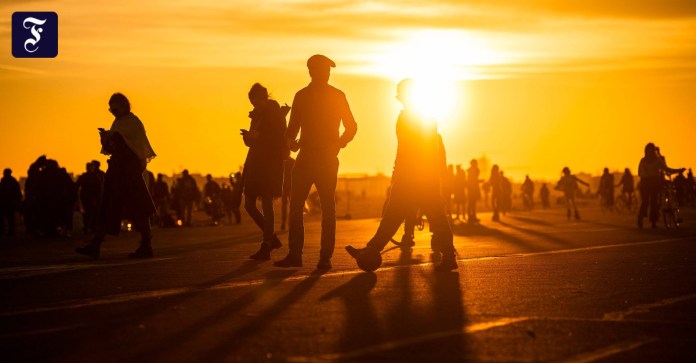 VA few days ago the winter jackets could hardly be thick enough, now a sweater is sometimes enough in the sun: High “Ilonka” brings Germany spring-like weather.  The  high is over southeast Europe and make no move to disappear from there, it said on Sunday from the German Weather Service (DWD) in Offenbach.

Low pressure areas would have no chance of encroaching on Germany with their fronts. “A change in the weather situation does not appear before the coming weekend at the earliest,” explained meteorologist Marcel Schmid from the DWD weather forecast center.

Already on Saturday and Sunday, many people were drawn outside. For the first time this year, according to the DWD, the 20-degree mark was cracked: In Müllheim near Freiburg, 20.3 degrees were measured on Saturday afternoon. After the polar air had led to freezing cold on the two previous weekends, the parks were now full of strollers and people with motorbikes or convertibles were out and about on the streets.

The  first spring bloomers can be seen in many places.

The re, the police said they saw a number of cars from neighboring federal states, so checkpoints were set up at the town entrances have. On Saturday alone, 65 people were turned away from 28 vehicles and asked to return, the police in Rostock said.

Elsewhere too, with mild temperatures and lots of sunshine, streets, squares and green spaces were cramped.

The  police from Mainz reported at the weekend that groups had stood together, walkers and cyclists had shared the paths that had become too narrow, and there were sometimes long queues at beverage stands. In Frankfurt, people bustled above all in front of cafés that offered their drinks to take away and the few ice cream parlors that were already open.

In North Rhine-Westphalia, too, the weather has lured people outside. “

The re are already significantly more people on the road than last week in the bad weather,” said a spokesman for the Cologne police on Saturday afternoon. However, these are mostly couples or families. At first there were no large gatherings of people. This is also confirmed by the police in Düsseldorf. A spokesman said the regulatory office was heading towards the old town. But even there there have so far been no major violations of the Corona regulations.

Anyone who wants to soak up the sun has a good chance of doing so in the next few days: after the dissolution of individual fog fields, which form at night especially in southern Germany, the sun often shines for about ten hours a day, according to the DWD forecast. However, Saharan dust reaches us, so that the sky is sometimes a bit milky and the sunlight takes on a reddish touch. That in turn promises beautiful sunrises and sunsets.

The y are mostly between 12 and 18 degrees,” announced the DWD. On the northern edges of the western and southwestern low mountain ranges and on the Upper Rhine, peak values ​​of around or just over 20 degrees are possible.

The  nights could still be slightly frosty, especially in the south.

Kriftel: Danger from unsecured accident site on A 66 between Hattersheim...

Flock third at the Skeleton Home World Cup in Igls

Separation from Ana de Armas ?: Ben Affleck should be single...

Nationwide day of action: Mask controls on trains and buses

London wants to use marine against EU fishermen in a no-deal...

Corona party in Linz dissolved by the police