After the exhausting evening in the ZDF “sports studio” with many critical and absolutely justified questions about the appearance of FC Bayern outside the field, Karl-Heinz Rummenigge had another sour on Sunday.

Munich health officer Beatrix Zurek on Deutschlandfunk said that the chief executive is not a role model when it comes to the mask requirement and added: “I would suggest that you speak to him again on the part of the hygiene officer. In any case, it is not a good example.” Rummenigge had recently often worn his mask below his nose in the stands – and had to take criticism for it. As with some other issues.

The  Bayern boss in defense mode

That’s why you saw the Bayern boss on Saturday evening in defense mode. ZDF presenter Jochen Breyer kept asking when it came to Bavaria’s connections to Qatar, possible vaccination privileges for professionals, or the special role for football. Rummenigge defended himself, he hardly wanted to know anything about his own mistakes. “We’re not arrogant at all, we don’t ask for any special treatment at all,” he said at one point. Even when it comes to vaccination, he did not demand any “special sausages”, said Rummenigge. His statement recently at Sport1 was rather “misunderstood by some”, he said, but admitted: “Maybe I expressed myself in a misunderstood way.” Footballers could be role models for German citizens, repeated Rummenigge, but this time added: “If there is ever enough vaccine. We don’t want to push ourselves in any way.”

Partnership with Qatar under fire

Rummenigge was particularly troubled when it came to questions about the close partnership between FC Bayern and Qatar. Rummenigge demanded that one had to show the “necessary patience” with the desert state, and that Qatar had “come a long way” in terms of human and labor rights. And if it takes a little longer here and there, it is due to the different culture of the strictly Islamic country. “Human rights violations,” said moderator Breyer, “are not a culture.” Apt!

Does football help improve the situation?

Rummenigge countered the demands that Bavaria should position itself more strongly vis-à-vis Qatar and send clearer signals: “We at FC Bayern are of the opinion that a lot more can be achieved in a dialogue than in a permanently critical attitude.” Football makes a “great contribution to improving the situation”. But: “We cannot improve the whole world.” Rummenigge went on to say that it was positive that football could even be played during the Corona period. Relocations of international games to countries like Hungary have to be accepted. “This is not a decision by the German clubs, it is a decision by the Uefa,” said Rummenigge: “Do you know what the alternative would be? No longer participating in the Champions League.”

An unfortunate weekend for Bayern

But that is of course not a good idea, after all, “millions of people” are concerned with football, according to Rummenigge: “I think we have to be a little careful that we are not currently making the football debate a debate of envy.” At least this statement was unfortunate – like the entire weekend for Bayern. In the end, it was also fitting that the former world-class striker Rummenigge did not hit the “Sportstudio” goal wall. 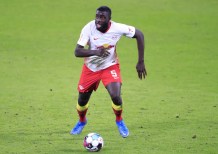 French baker starves himself to the hospital for refugees

Donald Trump vs. Mitch McConnell: The tyrant declares war on the...

Borussia Dortmund wins thanks to Mats Hummels and Erling Haaland at...

This is how Berlin plans the vaccination

All new infections in federal states and counties