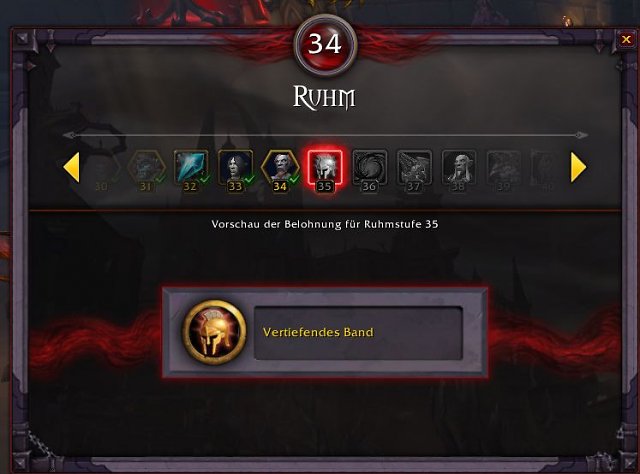 The n the fame levels including rewards will be increased by 40 steps. That was recently confirmed in an interview on BlizzConline.

In a BlizzConline interview with

The  Starting Zone, we learned that all of our favorite companion, Pepe, will receive pact-specific costumes.

The se costumes are tied to the 40 new fame levels that we are allowed to earn in Patch 9.1 of WoW Shadowlands.

So not only expect another 40 Renown Levels but also you’re going to be able to be unlocking all of these different chapter questlines. […] It gives you a whole lot more quests to unlock as you’re increasing that Renown track as well as unlocking those new Cosmetic Armor sets, the new flying mounts, flying itself and of course, we’ve got to put him in there because he hasn’t been in for a little while, brand new Covenant Pepes to ride on your head as well.

As we learned beforehand and later at BlizzConline, the new cross-class pact armor sets and flying in the Shadowlands are tied to fame levels, among other things. To be able to activate the flight license you have to have completed the pact campaign in patch 9.1, which, as before, will also be linked to the fame levels. Flying will then be possible from level 50 and account-wide.

What exactly you have to do with the upcoming update to increase the fame levels is not yet known. We may return to collecting anima and freeing souls, but we may need to complete activities in the new gullet area of ​​Korthia.

The  further we progress in the pact campaign of patch 9.1, the more quests we will get in Korthia. First and foremost, of course, you want the Pepe costumes – of course …

Terzic in the pillory – Hummels with a clear opinion

ROUNDUP: VW under corona pressure – Works Council Chairman: Board of...

Additional vaccination doses – Vaccines from Astra-Zeneca and Moderna will be...

From Monday (November 30th) everyone wants to go to Lidl and...