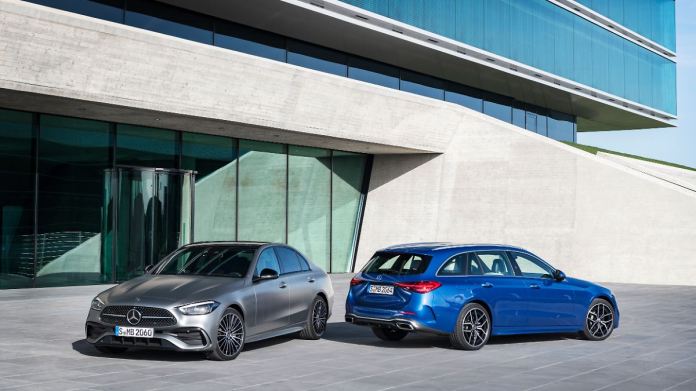 The  loss of the towering Mercedes star is likely to have been just as exciting for the fans as the leaked photos of the new C-Class before its world premiere in Stuttgart. But in the end everyone might come together again under the motto “Upgrade your comfort zone”.
In 1982 Mercedes launched the 190, the first compact Benz and a real successful model on the road. Affectionately known as the Baby Benz, the small Mercedes becomes the volume model of the Stuttgart company. In the course of a nomenclature change, the 190 became the C-Class in 1993. And that’s how it stayed until today. And so, at the world premiere in 2021, the compact glider, which continues to roll off the assembly line in the Bremen plant, will be presented as a C-Class. Of course, according to Mercedes, the new edition today shapes “the sustainability, the design, the sportiness and the philosophy of modern luxury”.

So it is not surprising that the bonnet has become longer, that there is only the central star with “propeller blades” in the radiator grille and that the once so much praised “diamond grille” is now history. Except for the question with the star, this should not worry the fans. Rather, it could be that they are enthusiastic about the rear passenger cell and C-pillar. After all, the silhouette has a significantly more coupé-like shape than its predecessor.

Split rear lights ensure more dynamism. In addition, the sportiness is also supported by the fact that unnecessary chrome trim has been omitted on the outer skin. Otherwise, when it comes to the design, they have remained true to themselves, relying on recognizability and few edges. In terms of dimensions, too, it remains 1.81 meters wide and 4.70 meters long.

The  sportiness of the new C-Class may now be questioned to the extent that there will be no six- or eight-cylinder engines for it in the future.

The  proud Stuttgart-born driver will only have four-cylinder engines in the future. In the summer, when the W 206 appears on the market, then only under the premise of “Electric First”. That doesn’t mean that a battery is used as fuel under the chassis, but it does mean that all engines, regardless of whether they are gasoline or diesel, are electrified. With the help of the 48-volt architecture.

In short: the diesel in the form of the OM 654 and the petrol engine as the M 254 become mild hybrids in combination and, regardless of the expansion stage, get a boost of a good 20 hp from an electric motor in the boost. At the same time, the fourth generation of plug-in hybrids in the form of the C 300 will be introduced with the C-Class. An accumulator with 25.4 kWh should ensure that the driver can cover up to 100 kilometers completely emission-free after the WLTP measurement cycle. In addition, the lithium-ion battery on a 55 kW DC charger should be 100 percent charged within 30 minutes. An 11 kW charger for three-phase charging at the wallbox is available as standard for charging on the domestic AC network.

The  biggest highlight for frequent drivers, however, could be that the interaction of two types of drive will not only take place with a gasoline engine, but also with a four-cylinder diesel, i.e. the OM 654. Which means nothing else than that the diesel was also equipped with an integrated starter generator and 48-volt sub-electrical system. Thanks to recuperation and the ability to “sail” with the engine switched off, the engine should work even more efficiently and save the driver tiresome charging at various sockets.

The  top models with the AMG logo in the form of the C43 and C63e come later and are also only equipped with four-cylinder petrol engines.

Otherwise, the Mercedes engineers have made sure that the C-Class fulfills the balancing act between sport and comfort in all respects.

The  fact that this worked very well has already been described on these pages, because ntv.de was allowed to ride the new C-Class a few weeks ago. Of the many subtleties that the noble compact from the new S-Class had noticed, nothing was to be seen.

The  interior and the two fully digital displays coming into production were covered with thick felt.

The  central display now has a screen diagonal of 9.5 inches as standard. A larger version with 11.9 inches is also optionally available.

Of course, the driver display is no longer a traditional cockpit either. As before, the 10.25 or 12.3 inch monitor should appear to float, depending on the choice.

The  significantly enlarged head-up display that is projected into the windshield could not be seen either, but it also comes from the Stuttgart luxury glider, which at the time confronted the author with a digital overdose.

The  central control element of the C-Class is the huge screen in the center console, which is inclined slightly towards the driver.

The  second display is of course behind the steering wheel.

The  buttons with their manual operability have almost completely disappeared and the majority of the commands are carried out via the touch surfaces or by voice control. Because, of course, Mercedes has also equipped the new C-Class with the latest MBUX generation, which is now standard in all equipment variants.

The  rear-wheel steering is not part of the standard equipment. With a steering angle of 2.5 degrees, it supports directional stability and simplifies maneuvering.

The  LED high-performance light with 1.3 million pixels per headlight, which can be ordered for the C-Class, is also optional. Strictly speaking, this lighting system could not only illuminate the street and hide individual parts, but you could also draw pictures on the asphalt. But this is more of a theoretical desire, because in reality this type of communication is not yet permitted.

Speaking of reality: How it all looks in total, how the new C-Class drives with a 2.5 centimeter larger wheelbase, what differentiates the individual engines and what prices Mercedes is calling for its bestseller, ntv.de will open in due course report on these pages. But what can already be said now is that, unlike in the past, the sedan and station wagon will this time be rolling onto the market together.

Oppo A53s in the test – budget smartphone for less than...

Formula 1: Sebastian Vettel already at a disadvantage? Shock for...

No Angels: Awesome sensation! Germany’s most successful girl band before...

Arabella Kiesbauer: “The return of ‘Starmania’ was …