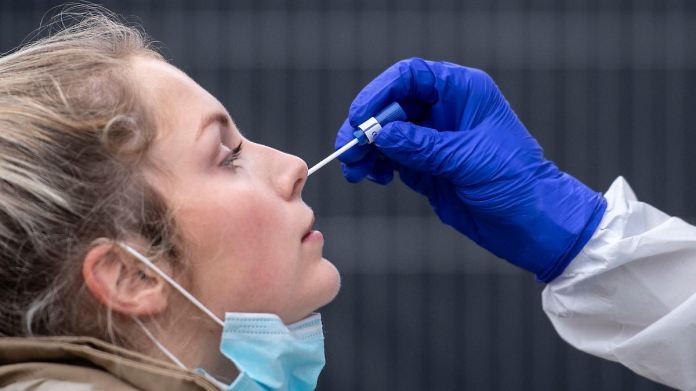 The  number of new infections with the coronavirus continued to stagnate at the beginning of the week.

The  Robert Koch Institute recorded 3883 new cases. In contrast, the number of deaths has decreased somewhat compared to the previous day of the week.

The  health authorities in Germany reported 3883 new cases to the Robert Koch Institute (RKI) within one day. In addition, 415 additional deaths were recorded within 24 hours. This is evident from the RKI figures. Exactly a week ago, it had recorded 3856 new infections and 528 new deaths within one day.

The  data reflect the status of the RKI dashboard from 3:11 a.m., subsequent changes or additions are possible. According to the RKI, the number of new infections reported within seven days per 100,000 inhabitants (seven-day incidence) was 60.5 nationwide in the morning – and thus slightly lower than the previous day (61.0). Four weeks ago, on January 26, the incidence had been 107.6. Its previous high was reached on December 22nd at 197.6.

The  RKI’s recording system, on the other hand, takes into account incoming reports up to midnight, with the current data status being announced the following morning.

Corona consequences in Turkey: Fired for reasons of morality

Merz in the FDP? No, media seaman’s thread

After an analysis, security company recognizes a security meltdown on Swiss...

Continuation in the USA: Apple shares in the red: Epic fails...

What the expropriation of housing would cost Berlin

At Krones, 350 more jobs will be cut in Germany