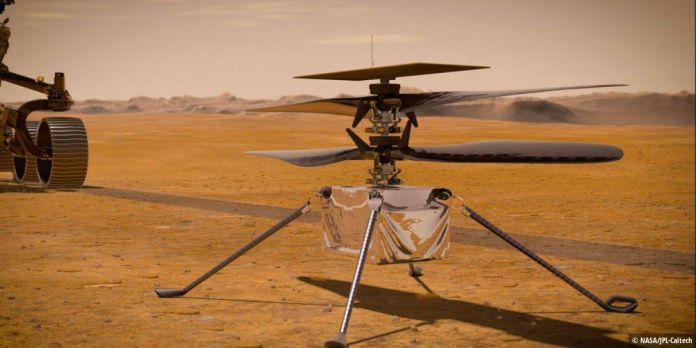 
Ingenuity landed on Mars a few days ago with Perseverance.  The  helicopter will soon be flying over the surface of Mars. Now he has sent his first signal to earth.

On Thursday night (February 18, 2021) the NASA rover Perseverance landed in the Jezero crater on Mars. He has an autonomously flying helicopter on board that is supposed to fly over the red planet. This helicopter has now sent its first sign of life to Earth, as announced by NASA.

Ingenuity is the name of the small, autonomously flying helicopter that the Mars rover Perseverance brought to Mars.

The  helicopter is located in the belly of the rover and will remain there for another 30 to 60 days.

The n Ingenuity will make its first flight attempt.

Ingenuity has now sent a first status signal to the “NASA Jet Propulsion Laboratory” in Southern California. This signal was relayed back through the Mars Reconnaissance Orbiter, which is in orbit around Mars.

The  signal shows that both the helicopter and its base station, which is attached to the rover, are working. This base station maintains the connection to Ingenuity and stores its transmitted data.

Two aspects are particularly important at Ingenuity: How far are its batteries charged? Does the base station work as planned, in particular the base station switches the Ingenuity heating on and off as planned so that its electronics work in the optimal range. Because at night the temperatures drop to -90 Celsius. Things are looking good on both points at the moment, so the NASA scientists are working to keep the helicopter batteries charged.

The  helicopter has six lithium-ion batteries that are charged on Mars by the helicopter’s solar cells.

Should Ingenuity survive the nights well and return safely to the rover from its first test flight, it will have up to four more flights ahead of it. With these flights on the surface of Mars, NASA is breaking completely new ground.

NASA rover lands on Mars by helicopter: 7 minutes of terror

Candidate Anna Corcelli would like to find her “soul mate”

“The Godfather, Epilogue”: Forgiveness and Damnation

Germany and the USA: Back to a new friendship

Burglary in the Green Vault: Another suspect caught