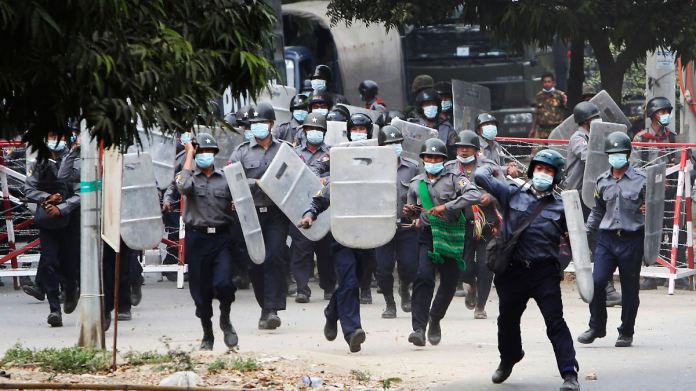 The  protest against the military coup in Myanmar threatens to escalate.

The  security forces crack down on the demonstrators with the utmost severity. More deaths are to be lamented. Dozens of people are injured.

At least two people were killed by security forces during the protests against the military junta in Myanmar. About 30 other people were injured in Mandalay, rescue workers reported. Security forces opened fire on demonstrators in the city.

Security forces fired live ammunition at protesters who gathered for a rally in Mandalay, the country’s second largest city. According to the rescue workers, there is also a boy who was shot in the head. Several hundred police officers were involved in the operation at a shipyard. At least five people were also hit by rubber bullets, said a photographer who was on site.

Hundreds of police officers and soldiers were on duty at the Yadanarbon shipyard in Mandalay during the day. Protesters yelled at the police to get out.

The  police then fired live ammunition.

A woman was hit in the head by a rubber bullet. On a video broadcast live on Facebook, it sounded like shooting was ongoing. A young woman who was shot in the head during the protests against the coup on February 9 in Naypyidaw died on Friday.

Protesters want to overturn the constitution

The  Southeast Asian country has been in turmoil since the military overthrew the government on February 1 and arrested de facto Prime Minister Aung San Suu Kyi. On that day, the parliament newly elected in November should have met for its first session. Suu Kyi’s National League for Democracy (NDL) party won the election by a large margin, but the military speaks of fraud.

Hundreds of thousands of people have taken part in street protests, and several hundred people have been arrested.

The  protesters are demanding the reinstatement of Suu Kyi.

The  army ruled Myanmar continuously until 2011.

After an accident at Quickborn: A7 free in both directions |...

Has Vettel gambled away? What does Mick Schumacher tear? ...