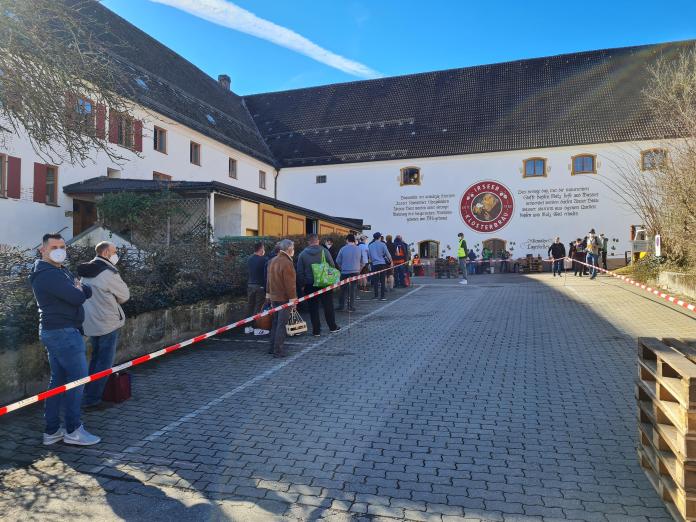 Unusual campaign by the Irsee monastery brewery in the Allgäu:  The re, around 2,500 liters of draft beer worth around 5,000 euros were given away to private individuals on Sunday. Managing Director David Frick had spontaneously called for it on Saturday – which apparently spread quickly.

His appeal said: “Due to the current situation, we cannot deliver our draft beer to catering customers. It would be a shame to throw away our artisanal and originally brewed beer.”

A long line formed in front of the issue

The  rush on Sunday was correspondingly large. In a video made by Frick himself, he walks for a minute and a half along a line of people who stand from the dispensing of the beer to the parking lots.

“I can’t say exactly how many people came. But they were all very sensible, adhered to our hygiene concept with FFP2 masks and kept large distances,” said the managing director of the Irseer monastery brewery to Bayerischer Rundfunk.

Beer would have expired on Sunday

According to Frick, the people also complied with the request not to drink the beer on site.

The  managing director says that you have been overrun a bit. It was a one-time action to save the beer that would have expired this Sunday, and rather to give it away than to dispose of it.

At the start of sales: rush for corona self-tests from the discounter

“Soon too much for vaccination centers”: Stiko boss sees the end of the vaccine shortage

News from tennis – all good things come in threes for...

After a bribery scandal – “Full House” star Lori Loughlin is...

Despite online flirtation: TV groom Michael did not recognize Lisa

Serge Gnabry and Sandra Jerze: Police operation at Bayern-Star because of...

Deutschland-Schreck moves to the second division