Harry and Meghan want to give a big interview on US TV – and just a few hours beforehand, the Queen will address the nation with a televised address. Is there a connection?

Oprah Winfrey’s interview with Prince Harry and his wife Meghan is eagerly awaited. On March 7th, they will speak to the US talk legend – and possibly not only News about the upcoming offspring betray. It has now been announced that Queen Elizabeth will give a televised address on Commonwealth Day. It takes place just a few hours before Harry and Meghan’s interview. Also on March 7, she will be seen in a special broadcast on BBC One, Westminster Abbey announced on Monday.

The  background is that the service in the cathedral, which is always scheduled on March 8, has to be canceled this year due to the corona pandemic. Insiders are now suggesting the Queen’s move to move her appearance forward 24 hours and broadcast the TV speech on March 7th, also as a swipe to her grandson and wife.

The  90-minute CBS special “Oprah With Meghan And Harry” will be shown in England at around 1pm.

No more appointments for the Queen: Harry and Meghan goodbye

The  talk with Oprah Winfrey was announced as an “intimate” interview. It is expected that the two will explain their withdrawal from all royal obligations in it from their own perspective. Also because the so-called Megxit took place exactly one year ago and was finally decided in March of this year at the end of the one-year period. So it is clear that the couple will no longer keep any official appointments on behalf of the Queen.

The  statement said, among other things, that both are now losing their last royal honorary titles and honorary offices.

The  small family now lives mainly in Meghan’s US homeland, California – in a villa in the coastal town of Montecito. Also because of this new constellation, the TV interview with Oprah Winfrey is being watched with eagle eyes by the British royal family – and may now have to compete with a TV appearance by the Queen.

More than 100,000 participants in protests in France 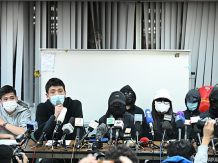 Hong Kongers sentenced to prison after trying to flee to Taiwan...