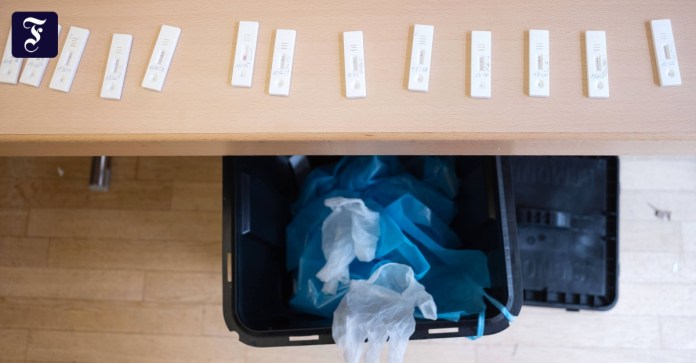 Dhe new motto in fighting pandemics is: test to the limit, put the chopsticks in your noses, whether in the doctor’s office, pharmacy or test center – in any case, it should be free for the person behind the nose, the bill works to the federal government. Health Minister Jens Spahn (CDU) rushed forward. Finance Minister Olaf Scholz (SPD), who is also his party’s candidate for chancellor, was no less generous. He promised: “We will do it financially.”  The  Corona cabinet did not make any decisions on testing on Monday. But it will be expensive.

The  bill goes to the taxpayer, but it won’t come until later. Initially, everything is financed through new debt.

The  only exciting question is: is the framework that the Bundestag set only last December sufficient for this? At that time, it seemed to be generous with new debt of almost 180 billion euros, and an expenditure buffer of 35 billion euros was created for unpleasant surprises in connection with the corona pandemic.

The  provision in the household is not enough. This fits the message of the news portal “

The  Pioneer” on Monday that Scholz is having a possible supplementary budget prepared for the current year.

It is about an additional debt of around 50 billion euros. According to reports, the Ministry of Finance has not yet reached that point. But they don’t want to rule out the possibility of having to come back to this instrument.

In one year, the budgetary situation turned 180 degrees. Before Corona, when the economy was running and tax revenues rose to ever new heights, the Union and SPD were able to repeatedly decide on additional expenses without having to take out new loans. In the pandemic, the debt brake in the Basic Law had to be suspended: for the first time last year, then also for this year.

Nobody in Berlin believes that it can be complied with next year.

The  only question is whether the exception clause will only be drawn once more or whether the debt rule will be rewritten in order to get closer to the hard upper limit in triple steps.

The  latter would make the work of the next federal government much easier.

After Chancellery Minister Helge Braun (CDU) unanimously proposed such an amendment to the Basic Law, his own party friends called him back. That is why Scholz – despite constitutional concerns in his own house – should once again refer to the emergency that is beyond the control of the state when he presents the key figures for the 2022 budget.

Originally, the cabinet was supposed to approve the financial framework for the years 2022 to 2025 on March 17th. Now you give yourself a week more. But the problems won’t go away on their own.

The re are new demands from every corner.

The  health minister not only wants to test for free, but also demands more money for the health insurance companies and the nursing staff.

The  Bundeswehr can refer to the international obligations according to which Germany should spend 2 percent of its gross domestic product on defense. Most recently, the so-called NATO quota was 1.5 percent.

The  federal government is not tapping into its reserves

The  federal government still has a reserve of almost 50 billion euros. Although he needs more money than ever, he is not tapping into them. On the contrary: if you sin, that is, incur debts, then do it right. In this way, he saves the reserves so that he can later better fill the gaps that open up between the expected income and foreseeable expenses. But unfortunately that doesn’t work either. In the good times, the Union and the SPD have managed in such a way that spending will rise sharply in the long term.

Because the income now falls short of previous expectations, the old calculation no longer works. As early as autumn, Scholz spoke of a considerable need for action. He put the budget gap at 9.9 billion euros in 2022 and a good 16 billion euros in each of the following two years.

The  release of reserves and the aid money from the European Corona fund were taken into account.

That was considered a tough scenario because it made it clear that the next federal government would have no leeway to create something with fresh money. Today budget policymakers would be happy to have such numbers. According to unconfirmed reports from their circles, the gap is now between 40 and 50 billion euros – a year.

FIFA 21 for PS5: This is in the next generation update

Schalke hero Matthew Hoppe: The gala is followed by disillusionment

Duchess Meghan, her miscarriage and the royals: walls of silence