With a night train, a distance of 1000 kilometers can be comfortably covered in your sleep. Large European cities literally grow together overnight and by rail. One association calls for Frankfurt, Karlsruhe and Barcelona to be connected in this way.

Get on the train in Frankfurt, Heidelberg or Karlsruhe, fall asleep and wake up again in Barcelona when the smell of breakfast coffee smells like something. “Why not work out whether it’s worth it?” Asked a French initiative, kicked the drum and carried out a feasibility study on the night train route between Germany and Spain. Because not only the Corona crisis has changed people’s travel behavior.  The  debate about climate change has also accelerated the renaissance of rail travel.

The  study by the French night train association “Association Objectif Train de Nuit” has now been presented in Heidelberg. According to the study, the investment in the connection between Catalonia and the Rhine-Main metropolis could well be worthwhile. It says that around 164,000 travelers a year can be expected. In addition, a combination of passenger and freight wagons is to compete with the congestion-intensive truck traffic on the long route between Spain and Germany.

Night trains are booming in Europe

When it comes to the trend towards night on the rails, Deutsche Bahn has so far been a little left out. She had scrapped her sleeping cars at the end of 2016 with reference to the low demand. Neighboring countries like Switzerland and Austria, on the other hand, rely on night trains. Railway companies in the Alpine countries already operate a dense network of night trains that, for example, connect Switzerland overnight with almost a dozen European cities.

The  Austrian Federal Railways (ÖBB), on the other hand, have filled the gap in Germany and are also offering night train connections to Italy, Switzerland, the Netherlands and Eastern Europe. In Germany, ÖBB operates the Nightjet on routes from Hamburg to Munich and Zurich and from Berlin to Zurich, and DB is a sales partner.

She also wants to participate more in the night train business again. Together with the ÖBB, the Swiss Federal Railways (SBB) and the French state-owned company SNCF, it wants to expand night train connections in Europe in the coming years. As early as next December it should be possible to travel by night train from Zurich via Cologne to Amsterdam and from Vienna via Munich to Paris. Another year later, a night train is to run from Zurich to Rome. For December 2023, the plan then provides for the re-establishment of a particularly symbolic connection: from Berlin to Paris.

Also interesting: this map shows all night trains in Europe

The  French also want to make greater use of the potential of night trains, not least because of their very good geographical location.

The  advantage: the investments are comparatively low since the rails and logistics are already in place. That is why the SNCF is also taking part in the latest French feasibility study, as its official supporter, Franziska Brantner, Member of the Green Party from Heidelberg, announced.

The  regional governments of Occitania and Grand Est in France as well as the Catalan railway company Ferrocarril Català (FGC) are also there.

The  main aim of the study was to examine the economic and technical details of the night train route that could lead from Barcelona via Montpellier, Avignon, Lyon, Strasbourg, Karlsruhe, Heidelberg and Mannheim to Frankfurt. According to earlier information from the association, the French expect a combined offer of passenger and freight wagons with a potential of around 200 travelers per day and direction, as well as a good dozen freight wagons. “

Radiant Fauci is back – and pokes at Trump

Aldi is leading the way: Discounter with quick changes in baked... 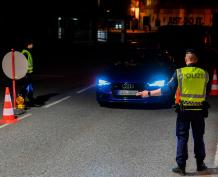 So tightly controlled the police at Christmas entry policy