Jasmin Tawil surprises everyone with this news: She has become engaged.

Nobody expected this news: Jasmin Tawil (38) has finally found her love happiness. As the ex- “GZSZ” actress announced on Instagram, she will soon be standing in front of the altar – with Kadeem (30), the father of her son Ocean (1). “Ocean’s father asked me and I said ‘yes’,” says Tawil. She is so happy and excited. And further: “We will get married this year.”

That the two are now a couple comes as a surprise. When Jasmin Tawil announced the baby news in 2019, she and Kadeem were not in a relationship. “I’m not with Kadeem, Ocean’s father, but we have a good base. He takes care of the little one, supports me, ”she said at the time of the“ picture ”.

That’s how she got to know her future husband

The y met in Hawaii when Tawil was homeless. Back then they would have lived in their van for a while. However, she did not reveal much about the child’s father, only: “He comes from New York and now works in a management position at a construction company.”

It is the second marriage for the ex-actress. Before that, she was with the singer Adel Tawil (42) for 13 years, three of them married. After the breakup, she fell into a deep hole. It took her five years to come to terms with the marriage and the separation. She was sometimes so desperate that she had suicidal thoughts.

Jasmin Tawil was missing for months

Jasmin Tawil was missing from May 2019. Her father hired a private detective to find her.

The  last known whereabouts of the actress was Hawaii. After months of worrying family and fans, she suddenly reported back with a son in September 2019.

Now, of all people, it is Tawil’s father Michael Weber against the wedding. To RTL he says: “I am shocked by this news. She has only just come through her first marriage and now she wants to plunge into a second. ” It is typical for his daughter that they fall headlong into such a relationship.

Her father doesn’t know where she is at the moment: “I suspect she is in South America, maybe also on Maui, but since we have only sparse contact, I cannot say exactly.”

Tawil wants to build a life of her own without her father’s help. However, he wanted to see her on TV again: “I had talks with a public broadcaster and was well on the way to getting her into a telenovela. It should even have a major role there. ” (bsn)

You can find help here

The se offices are there around the clock for people in suicidal crises and for their environment:

Addresses for people who have lost someone to suicide

“Didn’t have to work anymore”

Merkel on fire: Schwesig’s reckoning with the Chancellor is so violent...

While playing with his dog: Biden injured his foot

Borussia Dortmund after losing to 1. FC Cologne – caught in... 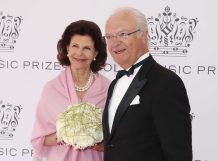 AfD sues against the protection of the constitution – DER SPIEGEL