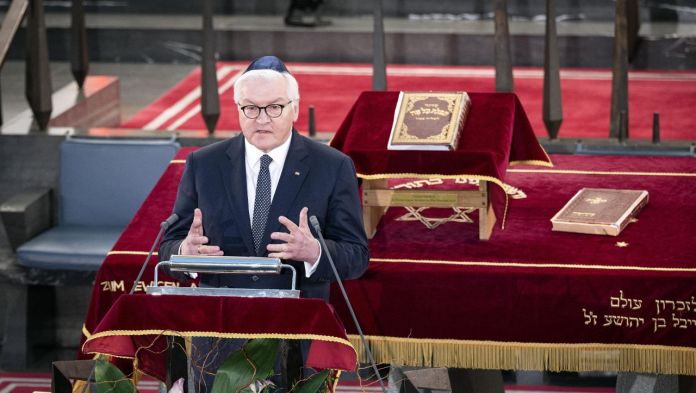 Federal President Frank-Walter Steinmeier has called on all citizens to resolutely oppose any form of anti-Semitism.  The  ceremony in the Cologne synagogue ushered in the series of events »1700 Years of Jewish Life in Germany«.
“If I, as Federal President, can wish for something for this festive year, then it is not just a clear confession that Jews in Germany are part of us, part of our common we, but that we will resolutely oppose those who still – or again – question, “said Steinmeier.

The  Federal Republic of Germany is only completely with itself if Jews feel completely at home here,” he emphasized.

The  fact that even young Israelis sometimes move to Germany is “immeasurably lucky for our country.”

The  earliest evidence of Jewish life in what is now Germany comes from the year 321. At that time, the Roman Emperor Constantine passed a law that allowed Jews to be appointed to the Cologne city council. “

The  Jewish community in Cologne is not only the oldest community in Germany, but also the oldest north of the Alps,” said the North Rhine-Westphalian Prime Minister and CDU chairman Armin Laschet.

The  festival year that is now beginning with around a thousand events nationwide is an ideal occasion to get to know each other better. “Let’s also set a clear counterpoint to anti-Semitic incidents, anti-Jewish conspiracy theories, and anti-Semitic agitation on the internet and on the street,” said Laschet.

Likewise, the Israeli President Reuven Rivlin called for “zero tolerance against any form of anti-Semitism” in a greeting. In the past few decades there has been both a strong revival of Jewish life in Germany and a dangerous rise in old and new forms of anti-Semitism, said Rivlin. One must tackle this – “whether on the street, in the online media or in politics.”

Rivlin said the history of Germany and the Jewish people had been linked for centuries. This included times of cruel persecution, but also phases in which the common history was shaped by cooperation and tolerance.

A Jewish museum is currently being built in Cologne on the re-excavated Jewish quarter from the Middle Ages. This exposure of an entire Jewish world including a cult bath, dance hall, hospital and thousands of everyday objects is considered to be unique in the world.

The  President of the Central Council of Jews in Germany, Josef Schuster, said that the knowledge of the German population about the Jewish past and present was unfortunately very limited: “However, a lack of knowledge about a certain group of people, especially a minority, almost leads always to prejudice. This phenomenon with all its terrible consequences runs like a red thread through German-Jewish history. ”

The  President of the Conference of European Rabbis (CER) and Chief Rabbis of Moscow, Pinchas Goldschmidt, stated in a written statement that the festival year should also be an occasion to advocate a sustainable future for Jewish life across Europe. “If Europe wants its remaining Jews to stay in Europe, then the rights of religious minorities and the opportunity to freely practice their beliefs must be guaranteed, as is the case in Germany and Austria, for example.”

The  ceremony was recorded on Wednesday in the Cologne synagogue and will be broadcast on ARD this Sunday.

Belgian storm talent Vertessen is hoping for a move to Bayern

Coronavirus – start of vaccination in Europe under time pressure

History of origin – the family tree of our Milky Way

Kornwestheim: Road works on Bahnhofstrasse between Eastleighstrasse and Holzgrundstrasse – traffic...