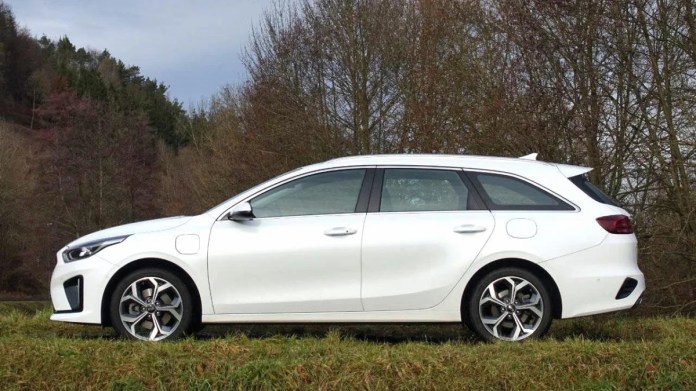 First of all: We got the Kia Ceed Sportswagon again as a plug-in hybrid (PHEV) because the drive in the Kia XCeed seemed interesting and station wagons on a compact basis are very popular cars in Germany, not just for families.

The  calendar for testing the Xceed now indicated June. When the Ceed station wagon arrived it was January, and this year January was very wintry even here in the wine-growing region. This showed a serious disadvantage of the Kia-PHEV:

The  manufacturer does not provide that the car is purely electric in the winter months. Even at two-digit plus degrees, the combustion engine almost always starts.

The refore, as a brief summary in advance: You can only drive this car purely electrically in the summer half of the year. As an introduction to electric driving, the Kia is not suitable for most customer ideas. I find it difficult at all to invent sensible areas of application for this car.

[Update:] Since concerned owners came forward, I would like to answer everyone once:

The  statement that this car cannot be reliably driven purely electrically in winter comes from the Kia technology, which I asked about the subject because it surprised me. I tried to drive without heating (off or on “LO”) – the combustion engine started anyway (battery full). That’s why (and about cruise control) I spoke to Kia technology several times. According to their statement, there are factors beyond the heating in which the engine necessarily starts, even in EV mode. For most owners, the biggest difference to the test is likely to be garage accommodation.

The  test car was outside the garage outside. If we ride this drive again in the cold, I’ll be happy to test it again. Of course, there cannot be a consumption value comparable to that of the competition when driving without cabin heating. Basically, I am employed per Korea and recommend Hyundai / Kia cars more than average.

A reader’s tip for the Ceed PHEV in winter: heating to “LO”, ventilation to 1, direct air to the windshield so that it does not fog up, and use the seat and steering wheel heating for warmth. That worked for him even at -7 ° C, but here too: the car is in the garage at night.[/Update]

Kia offers an “EV Mode”, which is difficult to mislead because the combustion engine ALWAYS started in the test, despite a full battery.

The  problem is the temperature. Incidentally, it doesn’t help to turn off the heating, as Martin advised me. It is also interesting why the combustion engine has to run, because this car has an electrical heating element with 6 kW output on the cabin ventilation. That would be enough for interior heating.

The  Ceed can drive the wheels as a serial as well as a parallel hybrid. This works because Kia uses a separate starter generator connected by a belt. This means you are more flexible and can start and drive more comfortably, says Kia.

The  example of the Audi Q5e shows why this can be a good idea if you can’t manage, like Mercedes, to grind off the clutch and start the engine transparently for the customer.

Actually, they know how to do it

The  whole configuration is astonishing because the Koreans know exactly how to build an efficient electric drive. Nobody can do it better. My only sensible thesis on how this car came about is therefore: It is probably most efficient to start the combustion engine when the Kia starts it, preheat the catalytic converter, heat the transmission, warm the cabin. I mean: a combustion engine like this has an average heating efficiency of around 80 percent! I’m just afraid that in the search for maximum efficiency, Kia has forgotten that pure electric driving is a value in itself that must therefore also be available in the winter months, even if it is less efficient. It could happen that metropolitan areas prescribe purely electric driving when the air values ​​are bad, and when is the air at its worst? In the winter.

Representing many practical features is the sun visor with clip, mirror and lamp, whose toggle switch switches the visor off when it is folded up.
(Image: Clemens Gleich)

I hope that Kia will change the concept in the future, because many cornerstones sound the way you want them to be. For example, Kia knows that a wallbox is not worthwhile for small batteries. That’s why they include a Schuko charging brick that is a) efficient and b) charges with up to 12 A (i.e. 2.7 kW). 10 A is usual, because this is the intended continuous output for Schuko plug connections or sometimes only 8 A. Kia customers can switch down to 10 or 8 A on less stable electrical installations.

The  difference to Schuko does not usually matter with the current battery.

The  only reason to buy is the company car tax relief. But for this reason I would take a very close look at the PHEV market as a tax policy artefact to see if something else might fit better. Because it pains me a bit to say that, but this Ceed is simply not a good car with this drive. It attracts with a completely sufficient 104 kW (141 PS). But in practice I can’t think of any other word than “excruciating” for what the drive feels like.

The  much weaker VW Golf 1.0 eTSI drives ten times as lively and consumes a lot less. Even in warmer weather around 10 ° C, the Ceed consumed 6.5 l / 100 km with about half the motorway share with 130 km / h Vmax – not a famous value for a compact station wagon. In winter weather with a wet road and temperatures of -1 ° to -4 ° C, this value rose to 7.3 liters. For comparison: This is how much the SUV-built Volvo XC40 consumed in comparable weather.

Charles Leclerc: Any other strategy wouldn’t have changed anything

Francesca Jones qualifies for the main draw at the Australian Open

Renovation at Paradeplatz – UBS wants to open its headquarters to...