Kim Kardashian and Kanye West are getting divorced. Now Kardashian has published her first personal Instagram post since the news.

After months of rumors, it now seems to be really fixed: Kim Kardashian-West (41, “Keeping Up With the Kardashians”) and singer Kanye West (43) are getting divorced. Since the breakup became known, Kardashian’s Instagram account has initially become unusually quiet. Now the entrepreneur is back with her first personal post on the platform, remembering her late father Robert Kardashian (1944-2003).

Kim Kardashian shows up with her family

The  41-year-old writes about a shared family picture with her sisters Khloé (36) and Kourtney (41), her brother Rob (33) and her father Robert: “Happy Birthday, Dad! I celebrate you every single day, but especially today . ” She adds: “

The re is so much to tell”. Is she indicating the divorce from Rapper West? She went on to dial her father’s old cell phone number, before asking him to send her a sign: “Please visit me in a dream soon. Can you also send a sign in the form of the symbols / birds we discussed? to have?” Robert Kardashian, best known for his legal defense of OJ Simpson (73), would have turned 77 on Monday (February 22).

Hint of separation from Kanye West?

Kim Kardashian also remembers her father with old photos in her Instagram story. In between there is a recording that was apparently filmed from a moving car with the break-up song “Driver’s License” from Olivia Rodrigo. It also includes the passage: “I know we weren’t perfect, but I’ve never felt this way about anyone. I can’t imagine how you can be so okay with knowing that I’m gone. ” It seems like Kardashian is hinting at their breakup here.

Kim Kardashian and Kanye West had been dating since 2012. In May 2014 they said yes.

The  spouses want to share custody in the future.

Justin Bieber: The poignant message behind his new video

Berlin & Brandenburg: Fatal accident with a police car: collision with... 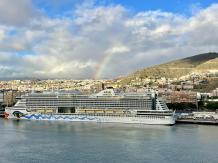 Cruise and Corona: little hope for the first months of 2021

US MP sues Trump based on a Ku Klux Klan law...