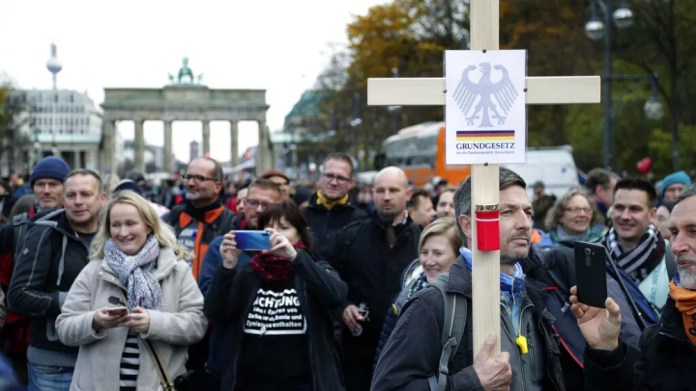 At the protests with tens of thousands of participants against the Corona rules in November 2020 in Leipzig and Berlin, hardly anyone wore a mask, and the distance was deliberately not kept. Scientists from ZEW Mannheim and the Humboldt University of Berlin have investigated how many coronavirus infections can be traced back to these “lateral thinkers” demonstrations.

The  study examined the infection process in districts from which many demonstrators had traveled in buses to the protests on November 7, 2020 in Leipzig and on November 18, 2020 in Berlin.

The  researchers estimate that between 16,000 and 21,000 coronavirus infections would have been prevented by Christmas if the two big “lateral thinkers” rallies in Leipzig and Berlin had not taken place.

Co-author of the study is Dr. Martin Lange. He says: “

The  study shows that such large demonstrations, where people sometimes do not adhere to the protection against infection, can function as a superspreader event.”

The  protest in downtown Leipzig in particular was controversial in advance.

Because the demonstrators did not comply with the police’s requests to leave the rally, water cannons were also used at the superspreader event in Berlin on November 18, 2020.

Dr. Martin Lange from the ZEW Leibniz Center for European Economic Research in Mannheim says: “A mobile minority that does not adhere to the applicable hygiene rules can pose a considerable risk to other people.”

The  SWR conducted an interview with Martin Lange about the study, which you can listen to here.

Many demonstrators took the “Honk for Hope” bus network to the protests.

The  main areas from which so-called “lateral thinkers” came from were the south of Saxony, the north of Bavaria and the east of Thuringia.

Christmas in Lower Saxony: Which corona rules apply – and which...

When the apartment becomes a location

School building instead of living space for Bonn residents: The million...