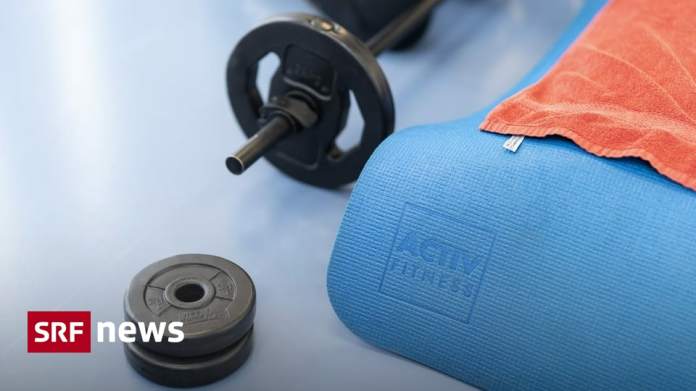 Instead of good resolutions and new fitness subscriptions, the year for the fitness studios has basically not even begun, as the association’s president Claude Ammann states: But it has gotten much worse. ”

Worse, because the centers stayed closed. And that in your busiest time.  The y make three quarters of their sales between autumn and spring.

The  fact that they may be able to reopen from April 1, as the Federal Council is promising, is therefore only half of the consolation.

Ammann himself runs a fitness center in the canton of Solothurn with physiotherapy and a doctor’s practice – with a total of 12 employees. Especially in small fitness studios like Ammann’s, half of the customers are over 45 years old.

Some companies are clinging to the last straw and hope that the cantons will finally do their job.

The y want to exercise regularly to stay healthy. Some fitness centers now offer online courses or outdoor activities with a maximum of five participants: “For a company that generates sales between 750,000 and 1.2 million, which the majority of our members do, it is not even cost-bearing.”

According to its own information, the association unites around 400 SMEs with 10,000 jobs – fitness chains are not represented. Ammann criticizes the cantons and the federal government, the hardship funds were a long time coming and would hardly be enough.

Many companies are facing financial failure. Especially in Valais and French-speaking Switzerland, where the studios have been closed for a long time: “Some businesses here have already been bought up or have given up.

The y cling to the last straw and hope that the cantons will finally do their duty. “

Lawsuits are being prepared

Another path is to be taken next week.

The  fitness center association wants to file a state liability suit and thus claim damages from the federal government. Urs Saxer, attorney and professor for constitutional and administrative law, confirms the preparations for this: “This is the only way in which any claims for damages can be asserted.”

Differences between the cantons

Large cantons – such as Aargau, Bern and Zurich – have already paid hardship benefits – including to fitness and health centers. However, there is no overview of where and how much was paid or not.

Saxer considers the effects of the Federal Council’s measures on the fitness industry to be unjustified and disproportionate. For example, fitness studios are not corona hotspots.

The  argument that indoor sport does not involve such a high risk of infection is, however, controversial.

The  hurdles are high

The  hurdles for a lawsuit are high: Felix Uhlmann, Professor of Constitutional and Administrative Law at the University of Zurich, explains: “In particular, state liability requires that we have acted unlawfully on the part of the authorities.”

The  travel industry, which also examined a lawsuit, finally waived. But in addition to the fitness industry, others are taking the legal path: the Federal Department of Finance stated, on request from Radio SRF, that it had received a “single-digit” number of state liability suits.

And, according to Uhlmann, this condition for state liability is hardly ever given: “I would assume that the courts give the Federal Council leeway, and that there is already no significant breach of office.”

We feel abandoned by the politicians and the cantons, who let us run into the abyss.

The  Finance Department must assess the complaints and prepare a statement that is sent to the Federal Council. If the latter rejects a statement or the lawsuit, the plaintiffs can go to the federal court.

But that takes time. May be too long for certain fitness and health centers. Association President Claude Ammann does not want to remain inactive: “We feel abandoned by the politicians and the cantons, who let us run into the abyss.” By suing for damages, he also wants to set an example.

She had to go to the emergency room because of unusual...

FCN is waiting for an exclamation mark: Hecking wants to see...

David Prowse: That’s why Darth Vader only got rich after “Star...

Corona in Germany: PK now LIVE – “Vaccination is the key”...

Online encyclopedia turns 20: “Wonder of the world” Wikipedia has to...

Second case of poaching in Geboltskirchen – call for witnesses

COVID-19 and the end of startups?