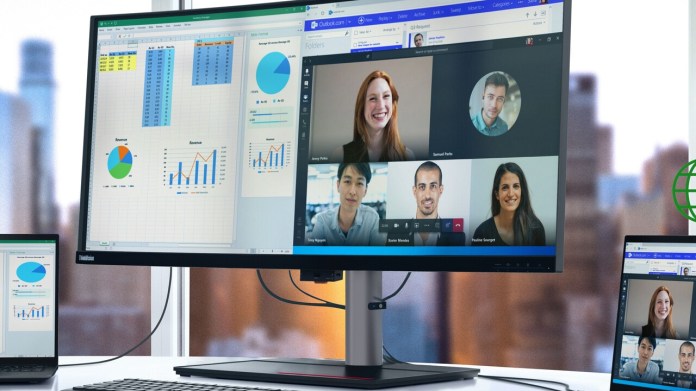 The  ThinkVision P40w-20 not only attracts attention with its high resolution of 5,120 × 2,160 pixels and a large display diagonal of around 40 inches.

The  slightly curved monitor is also equipped twice with the new Thunderbolt 4 interface and serves as a docking station and KVM switch.

The  resolution of 5,120 × 2,160 pixels, sometimes also described as Wide UHD (WUHD), is still a rarity in PC monitors and delivers significantly more pixels vertically than the somewhat more common Dual WQHD (5,120 × 1,440). In addition to the Lenovo ThinkVision P40w-20, Dell UltraSharp U4021QW, LG 40WP95C and MSI Prestige PS341WU use the WUHD resolution with around 11 million pixels.

The  P40w-20 also uses an LCD panel with viewing angle stable IPS technology and a typical contrast ratio of 1,000: 1. Lenovo specifies the color depth as 10 bits per RGB channel.

The  display, calibrated at the factory to an average color difference of Delta E <2, should cover 98 percent of the DCI-P3 color space. With a brightness of 300 cd / m² and a comparatively low contrast, there is no particular HDR suitability, but HDR10 content is at least supported.

In addition to the resolution, it is above all the interfaces that make the ThinkVision P40w-20 stand out from the crowd. After the LG 40WP95C presented in January, the monitor is one of the first monitors with the updated Thunderbolt 4 universal interface, which support Intel’s new Tiger Lake processors for notebooks, for example. Data with a cumulative rate of up to 40 Gbit / s (gross) and electricity (up to 100 watts) can be transmitted via the connection. Thanks to two Thunderbolt ports, a daisy chain connection with a second monitor is possible. Thunderbolt 4 can also be used to transmit the image signals for the native resolution of 5,120 × 2,160 pixels with a 75 Hz refresh rate.

In combination with numerous other ports, including USB-C, four USB A ports and an Ethernet port, the monitor becomes a docking station. This means that a notebook, for example, can be supplied with peripheral devices and power with just one cable. Thanks to the integrated KVM switch function, the mouse and keyboard can be used for two connected systems.

The ir image output can be displayed simultaneously in PiP or PbP mode.

The  front connection panel on the lower edge of the display, which offers the headphone output as well as USB-C and USB-A, is practical.

The  price of the high-resolution “Workplace monitor“Lenovo won’t announce until a later date. A clue: the similarly equipped Dell UltraSharp U4021QW costs around 2,000 euros.

The  ThinkVision P40w-20 should be available in the third quarter of 2021.

ComputerBase received information about this article from Lenovo under NDA.

The  only requirement was the earliest possible publication time.

Nico Schwanz and Julia Propkopy separated despite their pregnancy

Corona research: can the virus continue to be transmitted despite being...